THE ROLLING STONES: AGAINST THE WALL at the SCREAM GALLERY 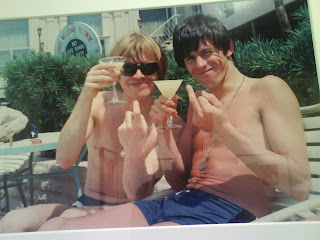 When the reissued Exile On Main Street made number one on the album charts the other week it restored a little faith in the dwindling music buying public. I’m guessing the average Stones fan has a few quid in their pocket and they’ll need a few bob if thinking of purchasing any of the photographs on display at the Scream Gallery. Using the old adage that if you have to ask how much something is you can’t afford it then I’m assuming they’re out of my price range.

That aside, purely from an exhibition point of view, they are well worth a look as they - according to the geezer in the gallery who may have been stretching the truth - consist entirely of previously unseen pictures taken between 1964 and 1971 and there are some real crackers. Robert Rosen caught them in ‘64 all taking a piss in the scuzzy lavs at Victoria train station and David Montgomery snapped them scoffing fish and chips down the Kings Road and in various states of undress for Sticky Fingers promotion. But the best picture is the image above (taken on my phone) by Bob Bonis showing Brian and Keith larking by the pool in 1965. The sign above Brian’s head reads “You’re Welcome To Swim”.

The Rolling Stones: Against The Wall is at Scream, 34a Bruton Street, London W1 until 3 July 2010, admission free.
Posted by Monkey at 20:55