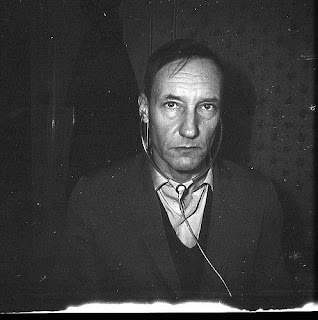 Before my thoughts, here are extracts from the IMT press release:

Few writers have exerted as great an influence over such a diverse range of art forms as William Burroughs. Burroughs, author of Naked Lunch, The Soft Machine and Junky, continues to be regularly referenced in music, visual art, sound art, film, web-based practice and literature. One typically overlooked, yet critically important, manifestation of his radical ideas about manipulation, technology and society is found in his extensive experiments with tape recorders in the 1960s and ’70s. Dead Fingers Talk: The Tape Experiments of William S. Burroughs is the first exhibition to truly demonstrate the diversity of resonance in the arts of Burroughs’ theories of sound.

Inspired by the expelled Surrealist painter Brion Gysin, and yet never meant as art but as a pseudo-scientific investigation of sounds and our relationship to technology and material, the experiments provide early examples of interactions which are essential listening for artists working in the digital age.

In the case of the work in the exhibition the contributors were asked to provide a “recording” in response to Burroughs’ tape experiments. The works, which vary significantly in media and focus, demonstrate the diversity of attitudes to such a groundbreaking period of investigation.”

Got that? Now, it would make sense to have the Burroughs recordings at the beginning and then to see/hear the replies afterwards but that isn’t how it is. His two tape experiments are near the end amidst a bunch of the replies playing one after another so you need a degree of patience to get to them. There is no information displayed: nothing about how and where they were made but I’ll presume they were made at the Beat Hotel in Paris with Ian Sommerville and Brion Gysin but Burroughs would conduct tape experiments until the late 70s – chopping up the order of his texts, playing parts backwards, making new words, and creating a hypnotic and disorienting effect on the listener that he believed could be used as a weapon of control.

The responses range from mildly interesting to downright pathetic. One is a blank monitor screen. Yeah, clever. Another is two black buckets of water. Get over yourself. The rapid cut multiple spilt screen video images by o.blaat with a slurping soundtrack has a Burroughsian effect and a hanging sculpture by David Burrows and Simon O'Sullivan (Plastique Fanstastique “Yage-Cat-Demon Shrine”) at least has a bit of thought and effort but the majority of exhibits simply expose smug self-satisfaction and a sorry lack of imagination - an accusation that could never be leveled at Burroughs himself.