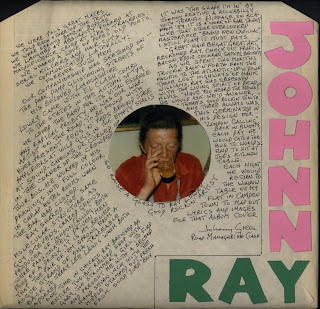 The Clash’s London Calling is a classic case of an album being spoiled by carrying too much flab, excess baggage and a suffering from a puffed out sense of its own importance. Move “Train In Vain” to side one, drop “Jimmy Jazz”, bin sides 3 and 4 completely and hey presto – they’d have had a decent record.

The sleeve though can stay. Designed by Ray Lowry and using Pennie Smith’s blurry photo of Paul Simonon it’s as good an album artwork as you’ll find. Using that as a starting point, 30 artists, performers, writers and assorted odd bods have donated new works to be auctioned to raise money for the Ray Lowry Foundation which provides funding to aspiring art students.

John Squire goes for a numbered cube painting, Tracey Emin describes first hearing the album, Harry Hill displays a hitherto unseen artistic flair with a large oil painting of The Clash bedded in the earth, Mick Jones and Paul Simonon offer pieces, Clash road manager Johnny Green pens a personal tribute (see above), Ian Wright’s (not that one) torn paper collage is a highlight as is Lennie Payne’s version of the cover produced on – wait for it - twelve slices of toast.

Ray Lowry died in 2008 and many examples of his inky sketches for the NME and the others are exhibited and offered for sale (they don't do anything for me mind). You’ve until 1st July to bid for the others.