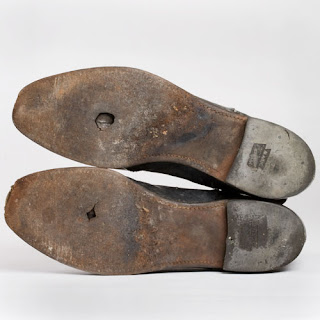 Oh, I thought you said William Burroughs had no soul.

Burroughs famously lived at 222 Bowery on New York City’s Lower East Side from roughly 1974 to 1981 in what he called “The Bunker”, a windowless, partially converted YMCA gym. When I went to have a look in 2004 I was quite surprised it was still a gym (or looked like one) and although much of New York is probably unrecognizable from when Bill shuffled his feet along the sidewalks, that little part, with CPGBs across the street and a general air of unpleasantness, was strangely familiar and comforting. What I didn’t realise was that beneath my feet, Burroughs’s lair stood largely untouched and preserved by his friend, the poet, John Giorno.

Photographer Peter Ross has now taken some shots of items that remain and caught his interest (like Bill’s shoes above) and is interviewed in today’s edition of The Morning News (click here) by Nicole Pasulka, along with a link to see more pictures.
Posted by Monkey at 19:05