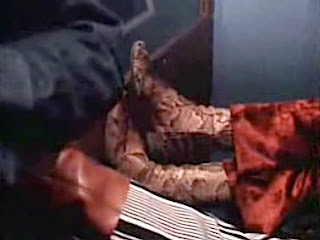 Gimme Shelter follows the 1969 Rolling Stones tour from New York to California and the shocking events that would lead to Altamont and the killing of at least two giant rattlesnakes to make Keith Richard’s boots. Those boots wiggle to a studio playback of “Wild Horses”, scuff against a stool as Mick and Keef perform “Prodigal Son”, and out of shot they look on in bemusement as a dog wanders across the makeshift stage in a dusty hellhole as drug crazed dingbrains beat the living daylights out of each other. They are the most magnificent boots in rock ‘n’ roll history, and their story is now available on a must-have DVD.

Of course, in glorious hindsight the whole Altamont fiasco is jaw dropping in its naive lunacy, but following Hyde Park and Woodstock it seemed like a good idea at the time. If that was today the poor bugger from Health and Safety would have kittens and be in desperate need of a new clipboard and pencil. It does though provide us with some important lessons. Like, if you give acid to a field of 300,000 of the great unwashed it’ll be the fat ugly hippies striping off and lumbering around rather than the beautiful flower children; although it’s some job trying to spot anyone vaguely beautiful in this rotting pile of filth.

The Hells Angels copped a load of grief for their antics, not least for the killing of Meredith Hunter but he was flashing a gun around just feet from the boots, so he had to go. And the Angels were mighty pissed off by then. They’d turned up to a free concert with their pool cues, made their way to the front, only to discover no pool tables had been laid on for them. I mean, with no eight-ball to hit, what’s a guy supposed to do?

The DVD has a clutch of extras to entice an upgrade from your worn video tape: twenty minutes of outtakes including “Prodigal Son” (mentioned above) and performances of “Little Queenie” and “Carol”, Mick hanging out backstage with Ike and Tina Turner (would you have the balls to take Ike’s guitar and play it in front of him?); an audio commentary from three of the film makers focusing on the practicalities and technicalities of making the film; and frustratingly brief excerpts from a radio broadcast the day after Altamont with eye witnesses phoning in with their experiences (“bad acid and bad vibrations from the start”).