NAT FINKELSTEIN: FROM ONE EXTREME TO THE ANOTHER 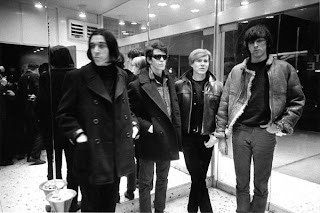 Ten years ago I co-ran a psychedelic club - Orange Sunshine - in Shoreditch and we received an email from Nat Finkelstein. He said he was coming to London, staying at such-and-such hotel, and wouldn’t it be good to meet up. I already had his book Andy Warhol: The Factory Years 1964-1967, so knew of his time photographing the collected freaks from there, but fearing one of those so-what-do-we-talk-about-now-I’m-trapped-with-no-where-to-go-looking-at-my-watch-and-feet moments, I made up some excuse.

Looking again at his pictures, this time at the Idea Generation Gallery, five minutes from my old club, I’m having one of those you-stupid-plonker-what-an-opportunity-wasted moments. This – as we see - was a man who clicked away as Warhol met Dylan, who took pictures of the Velvet Underground, of Nico, of Edie Sedgwick, of Marcel Duchamp even. Who was a political activist closely associated with the Black Panthers, a drug addict wanted by the authorities, who fled the country in fear for his life. And I was worried we’d have nothing to talk about.

There are some later works but the bulk here are his grainy black and white images from the Factory era. Nat studied photography under the art director at Harper’s Bazaar, so knew his onions, but with subjects like these it was hard for him to go wrong, at least as far as the pictures were concerned. In his book he pulled no punches and there wasn’t much love lost between him and some of Andy's Superstars by the time his stint ended there. He wrote:

Finkelstein died last October, aged 76. The mutants are on display until 14th February.

Nat Finkelstein: From One Extreme To The Other is at the Idea Generation Gallery, 11 Chance Street, London E2 until 14th February 2010. Admission free.
Posted by Monkey at 20:34