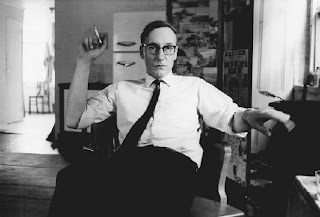 I recently bought a signed limited edition print of the above photograph of William Burroughs from the photographer John "Hoppy" Hopkins.

It was taken in the Lower East Side apartment Burroughs was using in New York between Chinatown and the Bowery during 1965. Hoppy was in America to take photos at the Newport Jazz Festival, so went to take some Burroughs pictures while there, some of which were later used in IT. I asked Hoppy what he was like. “He was okay but not one for small talk.”

Although they were not strangers, having previously met in London, the atmosphere was far from comfortable. Bill asked if Hoppy wanted a beer. Yes please, but asked for some ice in it. “You don’t have ice in beer” says Bill. Was he annoyed? “No, not annoyed, it just proved to him how stupid I was”.