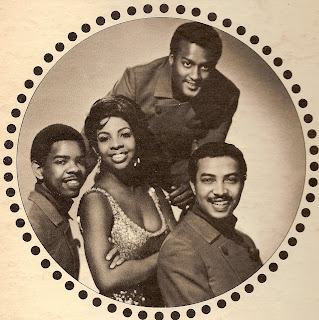 It’s long been my opinion that when it came to allocating the soul royalty titles Gladys Knight was scandalously overlooked for the Queen crown. That other woman? Pah.

Now – 48 years after her debut single - she’s touring the UK for the last time, with tonight being the second show in the impersonal barn that is Wembley Arena. With no big time introduction the lights go down and out steps our Gladys and on with the show. And a show it is. From an age and background where performing was a craft, a trade you learnt and worked hard at, Knight immediately transforms the vast soulless - and it must be said half full - arena into her own private party; half church/half Vegas Casino. Wembley Arena is hardly the Harlem Apollo but old habits die hard. She looks terrific with her wig hair on her head, a simple purple Emma Peel inspired trouser suit, and she works the stage: grinning, waving, chatting, dancing, and shaking her butt. Pure class but there’s a warm, down home spirit about her too. Don’t forget, this is the lady with a chain of chicken and waffle restaurants in Georgia to come home to.

But it’s that voice folk have come to hear and it can still send a shiver down the spine. What distinguishes Knight from her peers is she rarely shows off; there’s no need for histrionics, no need to over sell or over soul. She’s surrounded by four backing singers, who do just that, they back, they aren’t there to steal the limelight and they aren’t there to cover any inadequacies or failings in her voice. Put simply – there aren’t any.

Although having fair success at Motown, as one of their second-string acts she’s never been defined by that era in the way the Tops or the Tempts are, and it must’ve been deeply satisfying to stick a polished finger at Gordy when the big hits came after joining Buddah Records in 1973.

The absence of my own favourites (“No One Could Love You More”, “Stop And Get A Hold Of Yourself”, “Make Yours A Happy Home”, “Just Walk In My Shoes”, “Neither One Of Us” etc) is tempered by the inclusion of 1961’s “Every Beat Of My Heart”, and even more by 1962’s “Letter Full Of Tears” (“which only my Mum and Dad bought"). Most of the others you’d expect are present and numbers that have never done much for me in the past are reappraised in my mind: the gorgeous “Part Time Love” being one, and even the dodgy Eighties “License To Kill” won me over and took my mind off the hideous graphics displayed on the stage like early Microsoft screensavers. The only time the screens are put to proper use is during “I Heard It Through The Grapevine” when selections of old photographs of the Pips are flashed up. As for the Pips they’re represented by Gladys’ brother Bubba who joins for some banter and a slickly choreographed routine to give his sis five minutes for a breather and quick costume change.

I wouldn’t chose to end the evening with a Hi-NRG version of “I Will Survive” but boy, pockets of the audience lap it up, and I can see the appropriateness of it. I can’t believe she’ll be hanging up her microphone for good; it’ll be a terrible waste if she does. I’m Backing Gladys: Queen of Soul.
Posted by Monkey at 11:54