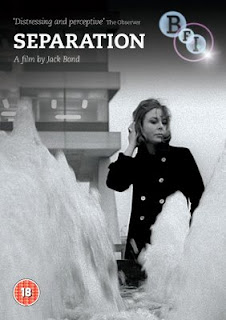 Directed by Jack Bond, Separation is an obscure piece of experimental and highly original British cinema that’s managed to avoid the radar of almost everyone bar hardened film buffs since its release in 1967. The BFI have now released it on DVD.

It’s a difficult film to neatly categorise. Shot in black and white and largely cheerless; yet this is no kitchen sink drama. These characters are far too well-to-do: they eat in fancy restaurants, dress in high end fashions, drive groovy painted cars around the King’s Road, and shop in expensive department stores. Despite all this, plus the sound of Procol Harum and occasional snatch of technicoloured liquid oil projections over naked bodies, it’s not your typical Swinging London film either.

Reviews at the time varied from the Daily Mirror’s blunt “cinema bonkers” to the Observer’s more considered “astonishingly distressing and perceptive”. As is the way, it’s a bit of both but initial reaction veers more to bonkers as it’s tricky to figure out precisely who is who and what the devil is going on. It gradually makes more sense (particularly on second viewing) but its non-linear direction and its is-it-a-dream-or-is-it-not passages leave the viewer as confused and disorientated as the main character Jane (played by Jane Arden, who wrote the screenplay and original story), who dealing with the emotions stirred from the separation from her husband, her relationship with her young lover, and the death of her mother tumbles deeper into mental breakdown.

There are bags of stylistic tics and effects throughout the film, which is so beautifully shot it can be enjoyed purely aesthetically until the story slowly sinks in. The swimming pool sequence alone has to be seen to be believed.

As always with BFI releases the packaging is faultless with a 30 page booklet and many extras including a full-length commentary by Jack Bond who sheds useful light on the film, its background, and his relationship with Arden who took her own life in 1982.

Separation is released by BFI. www.bfi.org.uk
Posted by Monkey at 19:03