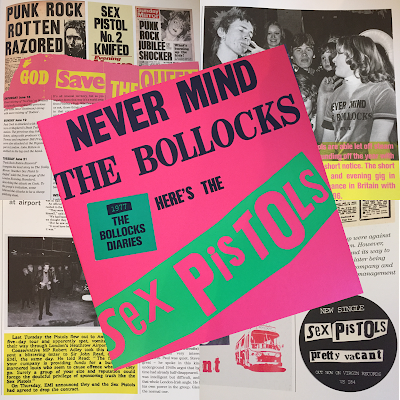 “Suddenly it was like the whole world hated us. Which I was perfectly fine with, it meant we were doing something right.” John Lydon

As public enemy number one – attacked in the streets, arrested, vilified in the press, banned from venues, banned in shops, banned from the radio, bouncing between record labels, heroin addiction, hepatitis, at war with McLaren – 1977 was, to put it mildly, a tumultuous year for the Sex Pistols.

The Sex Pistols 1977: The Bollocks Diaries recounts the events, blow-by-blow, in a hard-back album-sized new book published to coincide with the 40th anniversary of Never Mind The Bollocks.

Starting the year with the Grundy, “You dirty fucker”, incident still reverberating from December and Glen Matlock soon replaced by Sid Vicious, and ending flying to the US for a tour that’ll see Rotten, “Ever get the feeling you’ve been cheated?”, spilt the band two weeks into ’78, there’s rarely a dull moment.

Told through photographs, cuttings, memorabilia and interviews with the band and their entourage, it’s a chaotic tale of no fun. For all the uproar and agitation they caused – deliberately and inadvertently – at the heart of the Sex Pistols was a band, and Lydon in particular, who wanted to make music. The distractions and hullabaloo meant even surviving the year and recording Bollocks was something of an achievement, that it still sounds today like a tremendous “grinding juggernaut” is a minor miracle.

Film and television documentaries, CD box sets, reunion gigs, mugs, lanyards, coffee table books and whatever else might not be “punk”, and the Sex Pistols have been systematically homogenised, but sticking on that near-perfect album and reading through The Bollocks Diaries is a welcome reminder of when – and setting aside all the lasting cultural influence for a moment – the simple act of being in a band was dangerous, thrilling, challenging and a right pain in the bollocks for everyone.

The Sex Pistols 1977: The Bollocks Diaries as told by the Sex Pistols, is published by Cassell Illustrated. Out now.
Posted by Monkey at 11:19