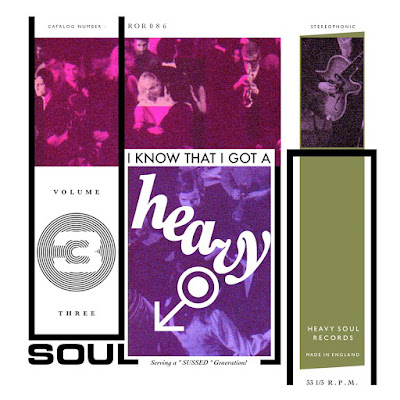 The latest Heavy Soul collection brings together acts from its own label and other combos loosely inhabiting the edges of the Mod universe.

Originality isn’t the name of the game but those expecting Rickenbacker bashing and songs about kids looking for a direction will be disappointed or delighted to hear next to nothing along those lines. The bands fall broadly into two camps: shiny, blue-eyed soul popsters and slightly down at the Cuban heel, grubby beat merchants.

The abysmally named Cow redeem themselves by kicking off proceedings with ‘Hit Me Inside’, a gloriously sunny northern soul style gem to warm the heart. The Sha La Las sing from a similar hymn sheet to Stone Foundation with the mellow soul groove of ‘Leave The Hurtin’ Inside’; less gloss and polish than their more illustrious peers which is no bad thing. Aunt Nelly pounds her funky organ to bring back BritPop memories of the Charlatans and Kula Shaker mixed with Marsha Hunt on ‘Move On’ while King Mojo’s recruitment of Graham Day on production duties is an indication of where they’re coming from (stylistically that is; geographically they’re from North Yorkshire) and the rollicking ‘Glad!’, with the ol’ blues harp accompaniment, adds to their feverish R&B. Four songs in, all using Hammond organ, all very good.

The continental flair of French Boutik’s ‘Le Casse’ is no less a treat and a fine entry point for those unfamiliar with 2016’s Front Pop. As for The Deep 6, it’s not the song so much as the recording quality that lets ‘Don’t Worry About Me’ down. Some bands suit a cheap, recorded-in-the-shed-on-a-4-track lo-fi sound whereas The Deep 6’s Freddie & the Dreamers/Herman’s Hermits pop could do with a more punchier production. Even without knowing anything about The Lost Boys it’s apparent these are a product of a later generation than the rest of side one. ‘China In The Sink’ isn’t a political observation on assertive state capitalism driven by Beijing but a fusing of Oasis and Arctic Monkeys influences.

Side two is more beaty and Logan’s Close more (early to mid-period) Beatles than anyone else here with ‘Listen To Your Mother’, who, I guess, should know. The Pacers caveman stomp their way to ‘A&E’ and The See No Evils get their jangles out for ‘The Love Has Gone Away’. The Beatpack head to the Ealing Club/Eel Pie Island for ‘I’ll Dance’ and The Mourning After follow a similar route with the maraca shaking noise of ‘Cross My Heart’. Best of this bruising bunch is The Chessmen who, despite choosing a title (‘Cunning Linguist’) amusing to only 15-year-old boys, hurtle through their punky adrenaline-soaked romp spouting indecipherable gibberish at unsuspecting passers-by. The Galileo 7’s broadly pop-psych ‘Cold Hearted Stowaway’, is the hardest track to pin down due to not wearing its influences so obviously; perhaps no coincidence it’s the strongest track on side two and among the best tracks the band have done so far.

Listeners will pick their favourites - there’s nothing I particularly dislike here, no tracks requiring a leap from the settee to skip - and while the majority of the bands seem comfortable occupying their own little niche a few offer more ambition. The personnel across the volume is peppered with familiar names from bands stretching back to the 80s and 90s (The Prisoners, Makin’ Time, The Threads, The Clique, The Mystreated etc), reflecting an aging scene, so it’s a pity Heavy Soul’s prodigious young talent, the prolific Paul Orwell, is conspicuous by only providing the artwork.

A short version of this review appears in the current issue of Shindig! magazine. I Know That I Got A Heavy Soul Volume 3 is available on LP and CD (with six extra tracks) from Heavy Soul Records.
Posted by Monkey at 11:03