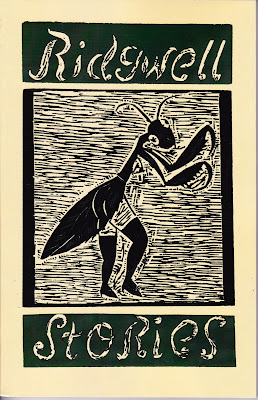 Ridgwell Stories is Joe Ridgwell’s first collection of short stories since Oswald’s Apartment back in 2010. Since then we’ve had numerous editions of poetry, novellas and individual tales but as much as I like Ridgwell in all formats, this is my preferred way to enjoy his talents.

The dozen episodes here contain Joe’s familiar scenarios: boozing in the last of London’s dingy pubs; sexual encounters; exotic, far-flung locations; and chemical romances. The search for the lost elation. The difference this time around, in addition to the improved writing (he’s dropped some of the extraneous words), is Joe’s now spent so long laying around in the sun it has frazzled his brain. His imagination has gone haywire. There were moments I was concerned for his well-being; the perverted bastard.

The book is complimented by woodcuts from Jose Pepe Arroyo, the cover being a praying mantis wearing suspenders to illustrate one of the stories. That's kinda what we're dealing with. I won’t spoil anything by revealing too much about the rest of the content, suffice to say Ridgwell Stories reads like a fucked-up series of Tales of the Unexpected. Oh, and a raft of well-known names populate the pages in ways which might not amuse them but tickled me no end. In particular I’m never going to be able to think of either Petula Clark or Bob Monkhouse in the same light ever again.


It’s all tremendous stuff, as much fun to read as presumably Joe had writing it with a cold beer by his side. Ridgwell Stories is published in three ludicrously limited editions by Bottle of Smoke Press. Get on it pronto.
Posted by Monkey at 09:58