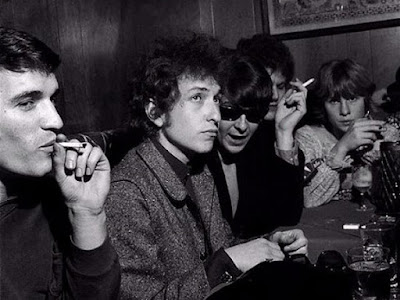 1.  Champion Jack Dupree – “Bad Whisky and Wild Women” (1963)
Plenty bluesmen were convinced bad whisky and wild women would be the death of them. Were they bothered? Were they ‘eck as like. Dupree lived into his 80s, so there’s probably a lesson there somewhere.

2.  Dorothy Berry – “Ain’t That Love” (1964)
“You Better Watch Out” receives a few club spins but I’ve always preferred this more raucous flip which kinda sounds like a rhythm and soul take on garage punk.

3.  Bob Dylan – “Desolation Row” (1965)
There’s Bob Dylan, then there’s everybody else. Seeing how Highway 61 Revisited was released 50 years ago today it’s only right to pick a track.

4.  Jimmy Smith – “Is You Is Or Is You Ain’t My Baby” (1968)
Jimmy could never claim his vocals were his strong point and the title of his 1968 album Stay Loose… Jimmy Smith Sings Again almost reads like a warning but it’s great fun with the organ maestro growling like a playful bear having his tummy tickled.

5  Merle Haggard – “White Line Fever” (1969)
“This one’s for all the truck drivers,” says Merle in his introduction before singing “White line fever, the years keep flying by like high line poles”. The version by the Flying Burrito Brothers is fantastic too, even if Gram Parsons implied a very different type of flying.

7.  Rod Stewart – “(I Know) I’m Losing You” (1971)
It’s unfortunate one of The Faces finest tracks and highlights of their live shows didn’t feature on one of their own albums but slunk onto Rod’s Every Picture Tells A Story instead. No matter, they soak the angst of the Temptations and in brandy and come out rattlin' and rollin', turning a loss into a gloating triumph.

8.  James Brown and Lyn Collins – “What My Baby Needs Now Is A Little More Lovin’” (1972)
This always strikes me as a bit of an oddity as Mr Brown and Ms Collins engage in a surprisingly light and nimble, piano tinkling duet. Very good though.

9.  Vic Godard – “Johnny Thunders” (1992)
I’m not sure if Subway Sect ever played on the same bill as the Heartbreakers but it’s quite possible. Either way, this 45 for Rough Trade’s Single Club saw Godard pay tribute in suitable style to Thunders, who’d died the previous year. Paul Cook drums.

10.  Captain America – “Flame On” (1992)
Post-Vaselines Eugene Kelly formed Captain America and their Scottish pop-grunge-stew was all the rage for five minutes until their Flame On EP landed them in bother with Marvel Comics for their name and, from memory, clothing chain C&A for pinching their logo. Under the title Eugenius they survived longer, signing – inevitably – to Creation but this song is the one which best recalls the lank-haired, oversized t-shirt wearing, floppy indie disco pint sploshing dance of the time. Admittedly that might not sound like a great incentive to check it out.