WILKO JOHNSON and ROGER DALTREY at the SHEPHERD'S BUSH EMPIRE 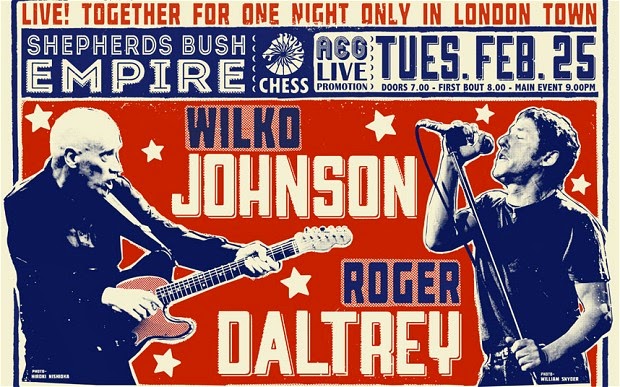 Issue 38 of Shindig! is out in newsagents today, containing  - amongst many other things - welcome features on Nigel Waymouth, Mary Love and John Sinclair. It also includes my review of Wilko and Daltrey’s gig from last month. Their album, Going Back Home, was released on Monday and sounds exactly as it should.

I don’t know if Wilko Johnson created a bucket list but making a new album with Roger Daltrey for Chess Records would be an audacious dream for most yet for Wilko, he simply got on and did it without any fuss. Tick, job done.

Ahead of release they’re in Shepherd’s Bush showcasing Going Back Home – a collection of new recordings of Dr. Feelgood songs, Wilko solo songs and a Dylan cover - for the first time. Accompanied by Norman Watt-Roy on bass and Dylan Howe on drums, for thirty minutes Wilko juts from side to side, chops at his guitar strings with his open hand and machine-guns his audience, belying the doctor who gave him an expiry date of four months earlier. As engaging as ‘All Right’, ‘Barbed Wire Blues’ and a drawn out ‘Roxette’ are, it’s impossible not to feel the expectation hanging heavy in the air awaiting Daltrey’s appearance.

One street and fifty years from where Daltrey fronted a fiery British R&B band at the Goldhawk Road Social Club led by a uniquely styled song writing guitarist, he’s back doing it again. With the addition of Daltrey, the always welcome sight of Merton Mick Talbot on keys, and Steve Weston blowing a mean blues harp, the sextet breathe new life and power into Wilko’s songs.

It’s an ideal combination, Wilko does what he does best – cutting razor sharp shapes and sounds - and Daltrey, at last, gets to wrap his vocal chords around fresh material. Stripped from the security of The Who, his familiar moves, his microphone twirling, Daltrey is out of his comfort zone but gamely throws himself centre stage, dancing like a slightly awkward fella at a wedding. His voice is still strong and any ragged edges are far better suited here to the blues-based ‘Going Back Home’, ‘Some Kind Of Hero’, ‘Sneaking Suspicion’ and ‘Ice On The Motorway’ than anything the theatrical Townshend may now throw at him.

They make a natural pair, full of down the boozer geezerness and old rogue charm. If Daltrey fluffs some lyrics, then so what? “This is a lot of shit to remember at my age,” he jokes, “you fucking come up here and try to do it”. When Daltrey asks if they can slow down so he can catch his breath he nods towards Wilko and says “Fucking cancer, it speeds him up, gives him energy”.

Whatever gives Wilko energy – determination, bloody-mindedness, luck, the stars – it rubs off all around him, from the band to the squashed, over-capacity crowd. It’s an emotional night but the overriding emotion is joy, as shown in the huge grin worn on Wilko’s face throughout as he looks across his left shoulder to see his bandmate, that bloke from The ‘Oo, belting out his own songs and a pandemonium inducing version of ‘I Can’t Explain’.


An encore gives a second airing to the rip-roaring ‘I Keep It To Myself’ before, without any fuss or sentimentality, a quick wave and dignified exit. Tick, job done.
Posted by Monkey at 16:57