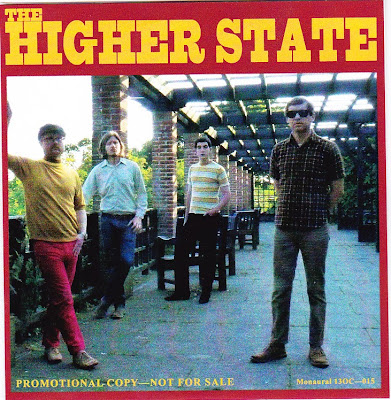 The world isn’t blessed with an abundance of great American 60s folk-rock albums yet, maybe improbably, The Higher State from the South-Coast of England have made one in 2013.

That might be factually debatable but aurally it’s undeniable. Not that it should cause much of a surprise as after four albums The Higher State have got this stuff down to a fine art. What is noticeable here is a slight shift of emphasis and greater focus. Their unshakeable commitment to authentic 60s recording methods is evident as always (recorded in their own 8-track analogue State Studios) but whereas previous album, the excellent Freakout At The Gallery, was more experimental and had a harder psychedelic edge, this new one is more-or-less straight folk-rock, with the stress on the rock part. There’s no wishy-washy acoustic numbers, everything is resolutely plugged in and a cynical disgruntlement bubbles beneath the surface.

I’ve written before about "Potentially (Everyone Is Your Enemy)" and it’s the wildest track here and the best single of the year, no question. “Why Don’t You Prove It” also drives fast and angrily and "I'm Going Home Now" owes a debt to Love's "You'll I'll Be Following". Those are among the most immediate tracks (plus the harmonica led "What Is The Deal") but with the pace knocked down a notch on some others they soon shine through.

“You’ve Drifted Far” is a beautiful and gently reflective whilst “Need To Shine” is among the many more Byrdsian moments. Any band adopting anything half resembling a jangle gets a Byrds comparison even when they sound nothing like them and don’t deserve to be mentioned in the same breath. The Higher State capture the feel and spirit of the early Byrds (think of the Byrds 1964 Preflyte demos rather than the cleaner sound which made their name). Yet whilst Preflyte and The Higher State could’ve been made in the same studio one after each other they each retain their own identify.

Twelve songs, none touching three minutes, and the whole album over within half an hour. Their record label, 13 O’Clock Records, call The Higher State “the UK’s foremost exponents of authentic folk-rock”. Just the UK? They’re selling them short.