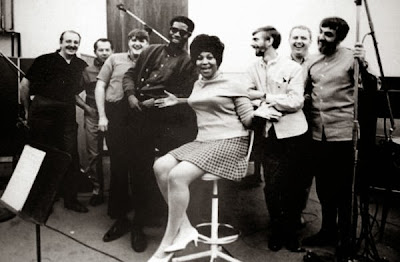 I’ll be honest with ya, for years I thought Muscle Shoals was simply the name of a recording studio not an actual location on a map. Tucked away down in Alabama with a population of around 8,000, the place is synonymous with the full-fat, funky sound cut deep in the grooves of classic 60s soul sides and beyond.

Greg “Freddy” Camalier’s film tells the story of the small city’s rich musical heritage through contributions from artists who recorded in the otherwise tranquil surroundings of trees, swamp and dirt roads at both FAME (Florence Alabama Music Enterprises) Studios and Muscle Shoals Sound Studios within a splash of a gator’s tail from the Tennessee River. An impressive roll call of talking heads (most filmed for the movie with occasional stock footage spliced in) takes their turn to pay tribute: Percy Sledge, Clarence Carter, Aretha Franklin, Etta James, Wilson Pickett, Mick Jagger, Keith Richards, Stevie Winwood, Jimmy Cliff, Candi Staton etc. All these and more recorded in Muscle Shoals but why the irrelevant Bono gets his slappable, sanctimonious face on screen without having any connection I known of – physically or spiritually - to the place is never explained. It’s a shame that for all the greatness contained within the 111 minutes it’s the image of Bono’s ego wrestling limelight away from the film’s intended focus which lingers most unnecessarily.

Muscle Shoals covers a wide base and therefore individual stories are kept brief. A lot, like Jerry Wexler at Atlantic sending new signed Aretha - a yet to be crowned Queen of Soul hitherto fumbling around for direction - down south and coming back with “I Never Loved A Man (The Way I Love You)” with the help of Spooner Oldham’s chord sequence, followed by five albums of hits, or Leonard Chess packing off Etta James during a lean period to be rewarded with “Tell Mama” and “I’d Rather Go Blind” are well known vignettes but the main focus isn’t on the established acts whose names appeared in bold letters on record labels but the guys like producer Rick Hall and the Muscle Shoals Rhythm Section house band, nicknamed the Swampers, who were lucky to make the small print.

Rick Hall is the central figure and his musical highs are offset by his candid disclosure of personal hardship and family tragedies. He’d cut Arthur Alexander’s “You’d Better Move On” in ’61 and followed it with another hit, Jimmy Hughes’s “Steal Away” recorded in his FAME studio. From there the hits kept coming, due in large part to his meticulous approach and the distinct yet adaptable sound of the Swampers, built around a nucleus of Jimmy Johnson (guitar), Roger Hawkins (drums), Barry Beckett (keyboards) and David Hood (bass). Muscle Shoals shines a light on these musicians and gives them a voice in the same manner Standing In The Shadows Of Motown did for the Funk Brothers in Detroit.

That Rick Hall (who now sports a very stylish and covetable moustache) and the Swampers were Southern white guys playing in such a gritty soul style – even helping to define soul music itself– was a source of regular surprise. A sceptical Wilson Pickett wondered of Rick Hall, “What does this white man know about the blues?” before clocking the cotton picking fields outside FAME and leaving with “Land of a 1000 Dances”, “Mustang Sally” and all his other smashes tucked in his bad ass pocket. Even Aretha – all dolled up, plonked on a chair and filmed from the other side of an empty room as if the bailiffs have removed the rest of her possessions – recounts her shock of how “greazy” the Swampers were; disproving the notion Caucasians ain’t got no rhythm.

In 1969 Hall struck a deal to work for Capitol Records. Meeting the Swampers to share the good news they suddenly announce they’re quitting and setting up their own studios with the help of Wexler and the Muscle Shoals Sound Studios is born. After picking himself off the floor Hall assembled a new band, The Fame Gang, and in effect the music world got two for the price of one although both would diversify into fields outside the soul patch.

Within two years Rick Hall was crowned Producer of The Year and his rivals, after a slow start, got a huge boast to their fortunes after Keith Richards’ snakeskin boots led the Rolling Stones into town to cut “I Gotta Move”, “Brown Sugar” and “Wild Horses”. A member of the Swampers now insists the Stones – in 1971 remember – were model professionals and weren’t indulging in any drink or drugs; Keith and Mick (good value throughout) both have a cheekily smirk at such a claim. Such was the apparent naivety of the Muscle Shoals musicians Stevie Winwood says Traffic felt guilty taking them on tour with them and exposing them to certain (unnamed) practices.

A squillion recordings have taken place since then – some massively successful, others less so – and Hall and the Swampers have kissed and made-up. Muscle Shoals is ultimately a feel-good movie with a brilliant soundtrack - what I like most about films like this is how they breathe fresh life into familiar songs - and one which puts helps put firmly fix Muscle Shoals to the musical map for many more years to come.

Muscle Shoals is in selected cinemas now.
Posted by Monkey at 09:29