THE IMPRESSIONS at the BARBICAN 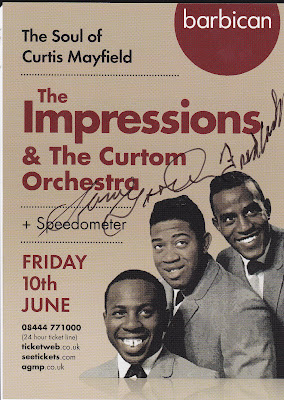 Can you feel the love? Nobody said it but everybody sure could feel it. For the first time ever, The Impressions walked on to a London stage and received the rapturous reception they thoroughly deserved. Northern Soul fans who’ve treasured them for as long as they can remember, who first heard them in youth clubs, all-nighters or on Kent albums, could now finally witness them in person. If you think for one moment that an Impressions without Curtis Mayfield was going to temper that excitement, you’d be wrong. Very wrong.

The Impressions have always been the vocal group of choice for the discerning soulie. Their phenomenal string of imperious recordings neatly spans the whole of the ‘60s. Their consistency was matched by their quality. There wasn't one poor single in that time. As a group they didn’t have the moves of The Temptations or the power and energy of The Four Tops but they had an understated elegance, a quiet dignity, and of course, the genius of Mayfield whose songs, voice, playing and business acumen made them a self-contained unit unreliant on outside forces or influences. Although Curtis left in 1970 they’ve soldiered on with a variety of lead singers joining Fred Cash and Sam Gooden; Reggie Torian who first joined in 1973, and after spells out the group, is now back at the helm.

The three debonair gentlemen stroll on and with a florish ease in to “Gypsy Woman”, sweeping their arms from left to right and right to left. Within thirty seconds a tear is running down the side of my face. There’s Fred Cash! With the friendliest bullfrog smile you’ll ever see. And there’s Sam Gooden! Like the kindly southern doctor in a spaghetti western. Reggie Torian has his own voice, close enough to Curtis not to distract and different enough not to imitate. Everyone is clapping along to “It’s Alright”. Even me briefly, and I never join in audience participation stuff. By now I’m wiping tears from both eyes and I couldn’t have been the only one judging by the obvious thrill being experienced around the hall. It’s unusual to be in a situation where nearly everyone was in the same boat. This was new ground. The Impressions. On stage. In London, England. Where had they been all this time? An orchestra of Acid Jazzers drawn from the likes of the Brand New Heavies and JTQ treated the music with love and respect and the group sang their hearts out. No other backing singers doing the work. Honest soul music from honest soul men.

I could try to pick out highlights but it was all one big highlight so I’ll list the songs at the end. The set was chosen wisely, there was nothing they shouldn’t have sung, and plenty more they could’ve. Special mention though for “You’ve Been Cheatin’” as it caused a spontaneous outbreak of dancing in the aisles and seats. If you’ve ever tried to execute northern soul moves in the tiny space you get in theatres you’ll know how difficult it is – but the urge was too great for many. Also “I’ve Been Trying” was especially good as it gave a chance for Gooden to take a greater share of the lead lines. Mayfield’s is naturally the voice most easily recognizable when listening to the Impressions but those records wouldn’t have been the same without Gooden and Cash and their contribution should never be underestimated. They have their own distinctive qualities and to hear them on “People Get Ready”, “I’m So Proud” and “Woman’s Got Soul” was a very special experience. No other soul group touch as deeply and as emotionally as the Impressions. I was lucky enough to see Curtis a few times before his tragic accident and those nights have stayed with me and this one will too.

After the show they remained behind to sign autographs. If the British are supposed to be a nation who love waiting in queues you wouldn’t have thought so from the chaotic and tetchy scrum that ensued around their table. I’d like to report I engaged them in a chat about growing up in Cabrini-Green but simply to shake their hands and say thank you was more than enough to feel the waterworks stirring again. They didn’t play “You Ought To Be In Heaven”; they didn’t need to.

Setlist: Gypsy Woman, It’s Alright, Talking About My Baby, I’m So Proud, Keep On Pushing, I’ve Been Trying, Woman’s Got Soul, People Get Ready, You’ve Been Cheatin’, We’re A Winner, I Loved And I Lost, This Is My Country, Choice of Colors, Superfly, Mighty Mighty (Spade and Whitey), Move On Up.
Tweet
Posted by Monkey at 10:37