BOOKER T at the JAZZ CAFE 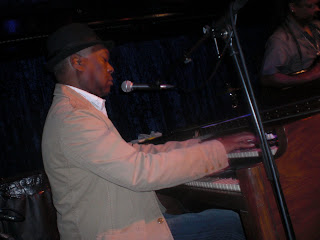 Stood at the bar as Booker T. Jones performs soul classics he helped create isn’t the worse way to spend a Friday night. He was recording for Stax before it was even called Stax and as house band for the label Booker T & The MGs would feature on hundreds of hits (and misses) that defined the Memphis soul stew. Add to that the songs Jones wrote, arranged, performed and produced and you’ve got yourself a bona fide legend.

For all that, he is synonymous with “Green Onions” and that’s always going to be a defining moment whenever he plays. He plays it surprisingly early – third number in – to get it out of the way. It wasn’t just his Hammond organ that made that record so timeless, it was Steve Cropper’s sharp guitar slashes, Lewis Steinburg’s walking bass groove and Al Jackson Jr’s taut drum snaps. Beyond Booker’s playing not much survives. The economy of delivery replaced by the fussiness of his MG-less band who indulge in extreme eyes-closed guitar wanking.

“Born Under A Bad Sign” the song he co-wrote and played on for Albert King comes next and he takes on vocal duties. He’s a jobbing singer, nothing more, and hearing him strolling through “Hold On, I’m Coming”, “Ain’t No Sunshine”, “Take Me To The River” and “(Sittin’ On) The Dock Of The Bay” only shines a light on how much vitality Sam and Dave, Bill Withers, Otis Redding and co infused those recordings. It wouldn’t have gone a miss to hear him on organ on those rather than barely audible guitar either. He does thankfully give the Hammond a poke for “Soul Limbo”, “Time Is Tight” and “Melting Pot”. Whether “Melting Pot” is improved by a rapping drummer is doubtful.

I’m sounding very negative and grumpy but it wasn’t bad. It was just, you know, all right. I don’t like Booker T and the MGs any less now and after nearly fifty years in the business, achieving everything he has, I doubt he gives a monkey’s about some jumped up punk’s minor quibbles. And they are minor quibbles, like I say, seeing someone at close quarters who shaped so many records in your collection isn’t something to be too sniffy about.
Posted by Monkey at 13:51