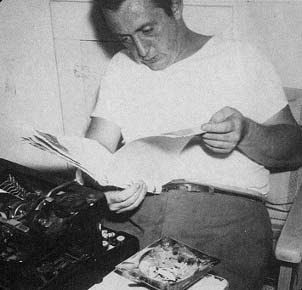 “Fante was my god”. As the rule states no mention of John Fante is allowed without Bukowski’s quote, I’ll get it out the way now.

Fante’s 1939 Ask The Dust was one of those books that as soon as I read it I couldn’t spread the word quick enough. Every person I told or I bought a copy for loved it immediately and hunted out his other books, particularly those starring his alter-ego Arturo Bandini.

He was blind and nearly seventy by the time Ben Pleasants interviewed him in the late 1970s. Those interviews have remained unpublished, except for a small segment released last week as a Beat Scene Press chapbook, John Fante - A Conversation with Ben Pleasants. Naturally enough he talks about Ask The Dust, as well as reminiscing about his pal Willam Faulkner and F. Scott Fitzgerald’s handshake. There are no earth shattering revelations but it’s a nice little collectable addition to the Fante shelf.

John Fante – A Conversation with Ben Pleasants is published in an edition of 125 numbered copies by Beat Scene Press, priced £5.95 at beatscene
Posted by Monkey at 20:24