BOB DYLAN ON CANVAS at the HALCYON GALLERY 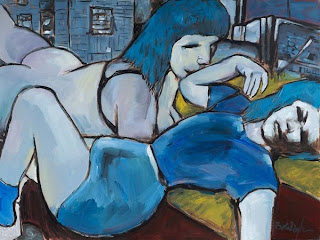 How does one separate art from the artist? Is it even possible or can art only be judged objectively (whatever “art” and “judge” mean) if seen or heard with no preloaded prejudices or preconceptions; if experienced totally new? Or do you need the back story? If given a tape of a bloke fumbling with a guitar and howling excruciatingly, and told it is Syd Barrett, Skip Spence or Roky Erickson it’ll be given some context and assessed accordingly. Given the same tape and told it’s by Joe Scroggins from Scunthorpe, it may simply be dismissed as shit. And what if you swop them over like the old switch trick of giving experts finger paintings by children and monkeys?

Bob Dylan’s paintings present this problem. If hung in a seaside B&B they may at best not be given a second thought, and at worst dismissed as gaudy cack knocked up by the senile cat-loving owner harbouring artistic pretentions. Hanging in a prestigious Mayfair gallery with his practised signature in the bottom corner they’re looked at through very different eyes. I mean, these are Bob Dylan’s paintings. Would I hang one on my wall? If I had a Mediterranean villa perhaps it would look nice, but mainly for what it is; for the possession, not for much else. Hmm, maybe this separation thing isn’t so hard after all.

Bobcats will be eager to interpret the work and pack meaning into them. Bob’s nobody’s fool and doesn’t reveal much. The pieces entitled “Train Tracks” display an obvious theme, stretching back to his self-mythologising days of being a Woody Guthrie lonesome hobo, scuffling along dusty railroads in one-horse towns, jumping passing freight trains. Even without that association they are the most interesting works but their very Bobness is reflected in the price. Yours for £450,000. Yep, half a million quid. How does it arrive at that price? Does Bob pluck a number from under the red sky? Does Johnny Ball? Do the gallery? Or if a Ronnie Wood abomination goes for X, a Dylan must be worth X times Y?

Other pieces depict a truck stop outside a diner, a fat woman in a pub, two ladies on a bed, a cafe, some flowers, and a view from a window. Stylistically they’ve been compared - according to the Halcyon Gallery spiel - to Toulouse Lautrec and Edgar Degas. If squinting in a poor light through your fingers whilst wearing sunglasses after a heavy night out, they do a bit.

The value, artistically and monetary, of “art” is been philosophised and debated by far bigger brains than mine. Bob Dylan has no equal in popular music, his Chronicles was beautifully written, his Theme Time Radio Hour is the best thing on the wireless, and he even managed the near-impossible feat of making a decent Christmas album. He’s got everything he needs, he’s an artist, but he has yet to paint his masterpiece. For us mere mortals, it’s good to know even he has limits.

Bob Dylan On Canvas is at the Halcyon Gallery, 24 Bruton Street, London, W1 until 10th April 2010. Admission is free but they won’t let you in if dressed like a hobo.
Posted by Monkey at 17:10