BABYSHAMBLES at the BLUES KITCHEN 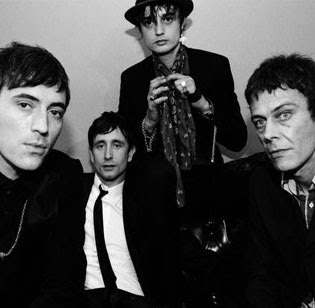 - They turn up then?
- Yep.
- What state was Peter in?
- Not bad. Fully functioning but in no mood for banter. Didn’t speak all night.
- Were they any good?
- Were okay. They’ve played better and been worse; and played worse and been better. Was a middling one.
- What did they do?
- Opened with What Katie Did; You Talk; Baddie’s Boogie; then a couple of newies.
- What were they like?
- Promising on first hearing. One was something about a stranger and had a sparkly Orange Juice feel and the other was a short scratchy punky blast almost like Public Image Limited.
- Blimey.
- Quite. Then was There She Goes.
- Oh, I like that one: “I caught a glimpse of your white plimsolls/ Twisting and turning to Northern Soul”.
- Yeah. Delivery got a few heads bobbing; Back From The Dead; a spiralling newie; Time For Heroes.
- “Did you see the stylish kids in the riot/ Shuffled up like mods/ Set the night on fire”. Cool. Were the kids rioting? Pete lose his hat?
- No, they were pretty subdued. Hat remained in place. I’m not sure that’s how that song goes anyway.
- Sounds like it to me. The rest of the band?
- Drew and Adam did a sterling job as usual, particularly Adam who had the shits all day. Mik looked like shit.
- What next?
- Unbilotitled; Carry On Up The Morning; Side Of The Road; Unstookietitled; Beg, Steal or Borrow; Killamangiro.
- “Ooh-oh-oh-Ohoooowoooh”.
- That’s the baby. Then Albion and another new one – a slowie – to finish.
- Right. How’d you remember all that?
- Was texting myself notes.
- Bit sad innit?
- Yeah, was gonna write a review.
- Why didn’t you?
- Watch it sunshine.
Posted by Monkey at 17:46