THE RIFLES at THE ROUNDHOUSE 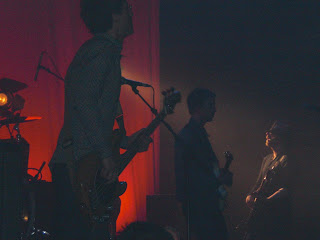 It’s difficult to pinpoint precisely why I like the Rifles as much as I do. If there was an indie Top Trumps and you got their card you wouldn’t have a strong hand; scoring low points in originality, inventiveness, influence, virtuosity and all-round coolness. Their strength lies solely in their no messing, no fussing, straight-down-the-line brand of modish pop-punk. 2006’s No Love Lost is a collection of razor melodies and lyrics which lend themselves to swathes of boisterous blokes singing along unselfconsciously. Must admit, that doesn’t sound very inviting and exactly the sort of thing that would normally have me running to the hills rather than to gigs. They may argue that it’s just about the music. But music is not just about the music is it?

Another thing they do have in their favour – and should count their lucky stars for – is a passionately loyal fan base. Even a year or two without a proper release they still sold out large London venues from the Empire to the Forum to the Academy. No mean feat. And it’s their supporters that make their gigs; where Fred Perry, Tootal scarved skinny boys and their paunchier elders (they'll be me) swop the (mythical) terraces for the beer throwing moshpit. Although the band put the graft in, they’re far from captivating performers. A guitarist in a hat and a neat line in bonhomie doesn’t compensate for a collective lack of charisma. And the less said about the bassist’s new Harry Potter look the better. I'd rather go blind than wear glasses like that.

Tonight unsurprisingly showcases nearly all of the new Great Escape LP plus a large portion of No Love Lost. Great Escape inches towards that dreaded “mature” sound that bands end up with on their second album; as if the debut album – which first attracted their audience - is somehow not good enough and they need to “progress”. The Rifles one doesn’t suffer too much, and apart from sagging in the middle it’s another strong set of toe-tapping singalongs. Lyrically there’s a sense of nostalgia that permeates through much of their material and the newer songs add an even more pronounced bleak sense of hopelessness that things were shit, are shit, and will stay shit. “And if I get away from the pain and the voices that hound me/ Well I’m not quite sure I’ve got the strength to start over again” (“Fall To Sorrow”); “Waiting for the day you’re not looking for something else” (“The Great Escape”); “Expect nothing changing except for the name of the day” (“ToeRag”); and so forth.

The Jam-like oldies “Robin Hood”, “Repeated Offender”, “Local Boy” and “Peace and Quiet” get the biggest cheers and still pack a decent punch whilst “Spend A Lifetime” displays an endearing heart on its sleeve vulnerability. “The General” is the encore closer and The Rifles’ most impressive track to date. It still won’t win any awards for innovation but with violins and trumpets beefing up their usual pie and mash fayre this is a best-yet. It’s no Forever Changes but it’s no This Is The Modern World either.

I’m not sure The Rifles are equipped for the Premiership; they’re more suited as a dependable Championship side, but if they can sign another couple of “Generals” or bring in a surprise match-winner they may scrape into the top flight, but like their songs, I’m not optimistic.
Posted by Monkey at 18:59