PETER DOHERTY at THE TROXY 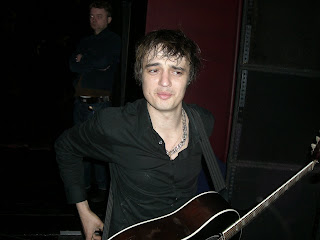 “The artist walks where the breath of the spirit blows him. He cannot be told his direction; he does not know it himself”.
Maynard Keynes, Arts Council of Great Britain, 1945.

It’s a lofty quote to associate with Peter Doherty but he'd appreciate it and even with an acclaimed album (Grace/Wastelands) and a series of well received shows nothing should be taken for granted. Of all the things he is, predictable isn’t one of them. So easily blown off course – by accident or design – you never quite know what you’re in for. So, tonight, Sunday 29th March 2009, where’s he at?

Doherty bounds on, three-piece suited and booted, drops hat on head, picks up guitar and we’re into the Libertines “Music When The Lights Go Out”. Almost immediately there’s a noticeable draught in the air as eyebrows are raised in unison; he’s in fine voice, strong and clear. He also manages to play guitar properly; all the way through with no mistakes. This is promising stuff. Of course, this should be the least you’d expect, but from someone who on another night can barely remember his own lyrics and whose fingers work like sausages, this is definite progress.

Graham Coxon and Adam Ficek, the first of countless musicians that come and go through the night, join for “Arcady” which is given a more Johnny Cash and the Tennessee Two feel than the version that opens Grace/Wastelands.

There’s not been a great wealth of QPR-related lyrics throughout the years but Doherty’s on a mission to up the percentage. Current groove laden single “Last of the English Roses” – number 67 with a bullet - has the finest Loftus Road moment yet: “She knows her Rodneys from her Stanleys”, doffing the trilby to legendary number tens Marsh and Bowles. When a beautiful “1939 Returning” – complete with string section - is followed by the swirling, cinematic “A Little Death Around The Eyes”, it appears Doherty is playing the album in order, seemingly confirmed by “Salome” up next. But proving you can rarely second guess Peter, instead of “I Am The Rain” we get the non-LP “Through The Looking Glass”.

By now I’m thinking this is the best I’ve ever heard him. No incoherent slurred mumbling, no songs falling apart, no forgotten words – totally focused and together. Professional rather than Potty. Even an annoying woman behind me, fog horning out every word, can’t spoil it; although I’m close to telling her to button it, before thinking I might just be being unreasonable.

From here on in, there’s the rest of Grace/Wastelands and more, including the towering “Broken Love Song”, with another QPR reference, and an endless procession of guests, most taking Doherty’s lead in being on their best behavior. A full Babyshambles line-up does “Unstookietitled” and even Mik Whitnall, whose guitar “skills” often match Peter’s, comes up to scratch. And Wolfman, who mangles every tune within earshot, keeps it respectfully toned down on “For Lovers”. Dot Alison adds little, Lee Mavers of The La’s means jack to me and he can stick that fuck awful song he’s milked for decades, and Stephen Street dresses as a Native American.

Street did a fantastic job on Grace/Wastelands (such a clumsy title), turning good songs into (largely) great recordings but I appreciate it’s “over produced” for some. Peter’s solo acoustic spot of “The Good Old Days” and “Can’t Stand Me Now” redressed the balance and he absolutely nailed them.

The chilled vibe of music and the salubrious surroundings of the Troxy (refurbished 1930’s Art Deco theatre) quenched the anarchic atmosphere of classic Libertines and Babyshambles gigs but it did tune the brain to the music. People listened. I love the mini-riots in tiny venues but that’s despite the music not because of it. But Peter couldn’t resist provoking some minor mayhem during the encore. “This is the last night of the tour and no-one has got up on stage yet”. A blistering “Time For Heroes” and “Fuck Forever” soon see the invasion commence.

This was the type of performance that supporters will point to as reaffirmation of their belief in someone who tests their patience like no other. This is why they’ve kept faith; this is why they put themselves through the mill. It’s nothing to do with the distracting baggage and circus - it’s the music. I don’t know what Doherty did after the show, but with his work done, I hope he got well trolleyed.

Set list: Music When The Lights Go Out, Arcady, Last Of The English Roses, 1939 Returning, A Little Death Around The Eyes, Salome, Through The Looking Glass, Palace Of Bone, The Good Old Days, For Lovers, Can’t Stand Me Now, Son Of A Gun, Unstookietitled, I Am The Rain, Sheepskin Tearaway, Lady Don’t Fall Backwards, Sweet By And By, New Love Grows On Trees, Broken Love Song, Albion, There She Goes, Time For Heroes, Fuck Forever.
Posted by Monkey at 19:07