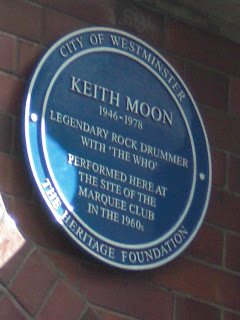 Sunday 8th March 2009 saw the unveiling of a blue heritage plaque in honour of Keith Moon at the site of the original Marquee Club in Wardour Street, now sadly passing itself off as “Soho Lofts”, i.e. a few tatty flats.

Was a good turnout, maybe 200 people with about 25 scooters parked down the road. Lots of Moon family and friends (they were distinguished by their attire – all suited and booted like a wedding party – as they were off to a reception luncheon afterwards at the Grosvenor), a scrum of photographers, a gaggle of geriatric mods albeit those of the patched parka/targets and arrows/lights and mirrors variety, and the curious passersby. “Is Keith Moon unveiling a plaque?” asked one. “Bit late mate”.

Mike Read, he off Pop Quiz not the dead one off Runaround , started the speeches by remarking how wonderful it was to see such a line of scooters “like the seafront of Bognor”. Ah yes, Bognor, iconic scene of a beach fight. But my toe curling became foot breaking when he launched into a chorus of “We are the mods, we are mods, we are, we are, we are the mods”. Even the Jurassic Parkas squirmed in their union jack socks. Roger Daltrey, standing nearby, chirped in with “we never sang that” in a desperate attempt to distance himself from such arse clenching embarrassment . Although to be fair to the Toryboy Cliffalike he did, I assume, have a hand in getting Moon recognised by the Heritage Foundation (he has something to do with it apparently) and Westminster City Council. The bulk of the credit though goes to Gary and Melissa Hurley who campaigned hard after originally being told “he not worthy”.

Daltrey, ever the affable geezer, said a few words (“Moon deserves many plaques”) but although he has spoken eloquently and emotionally many times about his pal, here he didn’t have much to say preferring to bring in Keith’s old mum, Kit. Kit, bless her, thanked everyone for making it possible and for turning up and said Keith was out there somewhere with us if we could find him. Was gently touching without being sentimental.

Then came the Mayor of Westminster who immediately made the hideous faux pas by saying she too was impressed by the sight of so many “motorbikes” which naturally enough was greeted with howls of derision all round. “I mean scooters. Scooters”. Too late you irritating bint. She also tried to curry favour by claiming she’d seen “these guys” play, but with no supplementary evidence offered I’d put that down to a glimpse on the Old Grey Whistle Test.

Finally, Roger, Kit and two of Keith’s sisters pulled the cord to reveal the plaque. Despite the collective wishes that something would go wrong so we could say “typical Moonie”, nothing did and it read “Keith Moon (1946-1978) Legendary Rock Drummer with The Who performed here at the site of the Marquee Club in the 1960s”. Hardly earth shattering but nice enough all the same.

Among the folk we spotted were Kenney Jones, Dougal Butler, Richard Barnes, Keith Altman, Garry fucking Bushell for christsakes, David Baddiel (although I didn’t recognise him), PJ Proby, Zak Starkey (who said he liked my shoes), and some young lad who was about sixteen and must’ve been Keith’s nephew as he looked an absolute ringer for him. Conspicuous by his absence, Mr Peter Townshend.

Starkey seemed like a pleasant, quiet chap and also attained kudos for being with the oi polloi rather than the fenced off great and good. Remember he was close to Keith as a nipper, and has now taken his drum stool in The Who, so must’ve been a strange day for him. Whilst talking, some gushing woman came over asking for his autograph, going “I think you’re as good a drummer as Keith Moon”. With an admirable blend of assertiveness and politeness (just avoiding you-stupid-cow) he looked up and said “that’s very kind, but I’m not”. End of. Wished we’d asked him about Keith teaching him to play the drums but the moment was lost.
Posted by Monkey at 18:23