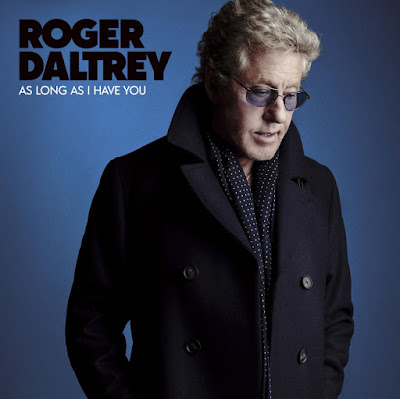 It’s difficult to decide the more eyebrow raising claim: Roger Daltrey’s assertion his first solo album in 26 years is a return to when the High Numbers were a soul band playing in church halls or Pete Townshend’s touching tribute this new record shows his old mate at the height of his powers. Mind you, while not quite taking the mantel of the Morrissey of Mod, Daltrey’s recent interviews have suggested rather than dying before he gets old, he’s living up to the theory people become more right-wing as it becomes harder for them to get around, so let’s stick to his less controversial outpourings.

There is a definite soul flavour in As Long As I Have You but next to nothing young mods would’ve heard down the Goldhawk Road Social Club and the expensive sounding production by Dave Eringa (of long-term Manics knob twiddling fame) is a far cry from the fumbling of a fledging R&B band. The result however is pleasingly better than a causal jaunt through tired 60s soul songs and we should be grateful 74-year-old Roger hasn’t gone down the Great American Songbook route favoured by so many of his generation.

Tackling the title track, Garnet Mimms’ thumping rhythm and soul classic, came as a surprise when it first received plays on the wireless, dangerously overblown in a Tom Jones manner, but after a couple of listens it settles down and powers along with just the right degree of ferocity to – in the unlikely scenario it was ever heard there - lightly splinter the pews of any cosy local chapel.

Pete Townshend contributes over-dubbed guitar to seven of the eleven tracks but it’s only on ‘How Far’ where he battles Roger for the spotlight, picking and licking like a Who’s Next outtake. A comparison I don’t use casually. ‘Where’s A Man To Go’ is a slower soulful blues and one of a number of songs with a gospel backing. Parliament’s ‘Get On Out The Rain’ is a righteous, marching, Primal Scream style rocker with Mick Talbot (a presence on nearly all tracks) laying down churchy chords as guitars wail and saxes honk and squall. Fantastic stuff and adds an extra something to the original. Whether it’s enough to warrant Roger appending his name to the writing credit, as he’s done, is something I’ll leave to Parliament’s legal department.

‘I’ve Got Your Love’ sways to a sea of lighters in the air before a reading of Nick Cave’s ‘Into Your Arms’. Although not doing anything radical it encroaches firmly into late period Johnny Cash territory and could induce a tear in sensitive listeners. It would be remiss not to mention Roger now has a slight lisp and it’s most noticeable on this track and on quieter moments throughout the album. It would have been a simple job to have cleaned/edited in the production so credit to Daltrey for leaving it untouched and offering honest performance full of raw emotional wisdom.

'You Haven’t Done Nothing’ plods along without the nimbleness of Stevie Wonder’s version and ‘Out of Sight, Out of Mind’ is believable storytelling and a vocal highlight. Joe Tex’s ‘The Love You Save’ and the self-penned ‘Certified Rose’ portray Roger as the old romantic devil, the horns recalling Van Morrison, while the closer, a Daltrey co-write, ‘Always Heading Home’, with piano and cello accompaniment, is another delicate moment like ‘Into My Arms’.

There are at least three different Roger Daltreys at play on this album: the microphone lassoing rock star, sensitive balladeer and tender soul man. He can still do the first well but it’s the second and third which impress most, along with the well-chosen, unobvious material.

Going back to those claims by The Two, although full of PR exaggeration and hugely debatable, perhaps they weren’t as preposterous as first appeared. As Long As I Have You exceeds expectations, should delight fans of The Who, and although the competition isn’t strong (Roger’s Going Back Home with Wilko Johnson the only serious contender), is the most satisfying thing either have done for decades.
Posted by Monkey at 09:44