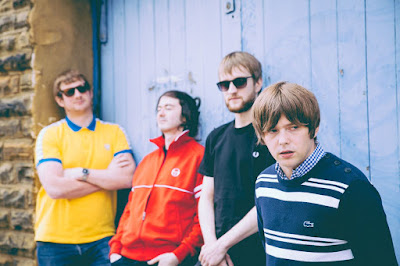 Holy bananas, check this out. The Lucid Dream return in April with new single, ‘SX1000’, a year after their equipment was stolen at a gig in Paris and fans, eager for the band to continue making music, dug deep to donate £10,000 to get them back working again.

The first recorded return for that faith is a guitar-free, seven-minute banger, driven by the band’s prolonged submersion in Chicago and UK acid house sounds from the late 80s-early 90s. Anyone who has followed The Lucid Dream in their ten-year existence will have seen them grow and develop, continually looking to move on, from drone to dub, psych to rave. They’ve always pursued an independent path, a route that's now put them ahead of any pack. Watch others try to follow.

‘SX1000’ is released on 6 April 2018 as a limited edition single-sided 12 inch on Holy Are You Records. The Lucid Dream play the London Dalston Victoria (Thursday 5 April) and Manchester Band On The Wall (Friday 6 April). Band photo: Danny Payne.