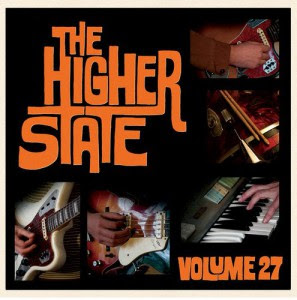 The Higher State return for album number five with a reshuffled line-up (most notably the departure of Mole from the drum stool) and the bit held firmly between their teeth. After the chime and jangle which characterized 2013’s The Higher State, this is a tougher, more abrasive effort and recalls the work mainman Marty Ratcliffe did back in the era of The Mystreated, particularly their Ever Questioning Why period, when Farfisa, folk, fuzz and fuckedoffness was the order of the day.

All of that is here again plus, as always, resolutely authentic garage recording techniques, equipment and (lack of) production creating a thick, claustrophobic air – far more Austin, Texas (home of their record label, the 13th Floor Elevators and the Golden Dawn - how they must love that association) than Sandgate, Kent (where they rest their heads).

Ratcliffe is in snarling and scathing mood - always his most effective setting - taking pot shots at former relationships in ‘Long Someways To Go’ and the scornful ‘I Suppose You Like That Now?’ while artist-in-his-own-right Paul Messis pens four of the twelve tracks, including the two wildest rockers, ‘Forest Through The Trees’ and the scorching ‘Smoke and Mirrors’.

Best of all for bitterness – and no coincidence the album’s highlight - is the acoustic ‘When We Say’ which launches these lyrical rockets: “I’d rather be weak and have feelings than be just like you, strung up and cold” before concluding with “There’s no accounting for taste, but at least I have some”. Ouch.

A couple of tracks on side two don’t cut such a deep impression but overall Volume 27 is filled with spite, rage and good old garage grumpiness.

Volume 27 by The Higher State is out now on 13 O’Clock Records. Available here.
Posted by Monkey at 15:59