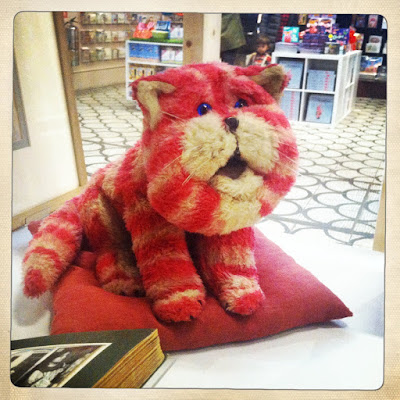 Unfortunately I bring you no hobnobbing tales of rock ‘n’ roll hedonism, no backstage stories of toking on an intergalactic joint with George Clinton, of snorting ashes of dead relatives with Keith Richards or even drinking Hennessey with Morrissey. No, today’s cultural snippet comes from a far more innocent place, although does involve coming face to face with a true legend. An iconic figure of BBC children’s television who, unusually, remains completely above suspicion of scandal or wrongdoing.

For on Sunday, Mrs Monkey and I bumped into the most important, the most beautiful, the most magical, saggy old cloth cat in the whole wide world. Bagpuss. There he was - the original one - in the Bethnal Green Museum of Childhood, same slightly gormless look on his face, mouth half-open, eyes widened in incredulous surprise at whatever had been brought before him. In this case, us: Mrs Monk fighting back tears of joy whilst simultaneously trying to mastermind a manoeuvre to remove him from his cushion and give him an enormous hug, and me trying to capture the moment on film and keeping an eye out for security. We were foiled by his pesky glass case.

All Bagpuss’s old friends were there too. The mice on the mouse-organ woke up and stretched, Madeleine the rag doll sat in her chair, Gabriel the toad picked a folky tune on his banjo, and Professor Yaffle climbed down off his bookend. None of them looked a day older than they did in 1974.

Idealistic romantics Manic Street Preachers promised to spilt up after their debut album but Bagpuss, after one series of 13 episodes, was genuinely 4 Real and quit at the peak of his success in a manner Paul Weller would emulate eight years later when calling time on The Jam. And like Woking’s finest and The Smiths, Bagpuss never got the gang back together to create inferior new material, keeping an immaculate back catalogue.

Made by Oliver Postgate and Peter Firmin for their Smallfilms company, Bagpuss and Co. are joined in the museum by other stars from their creations: all the Clangers including the Soup Dragon and the Iron Chicken, plus filming notes, drawings and equipment from Noggin The Nod, Ivor The Engine and more. There’s even an x-ray of a Clanger so you can see his insides made of, whisper it, Meccano and wood.

I usually roll my eyes at conversations that start “Do you remember Barnaby The Bear? Do you remember Spangles?” but I’ll admit to getting a little buzz out of meeting these characters from my childhood because, aged 6, like his owner Emily, young Monkey loved Bagpuss.

Clangers, Bagpuss & Co. is at the Bethnal Green Museum of Childhood, E2 until 9 October 2016, admission free. 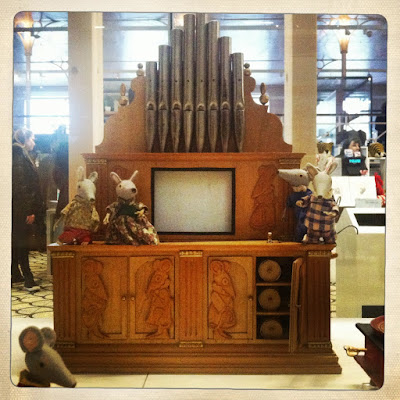