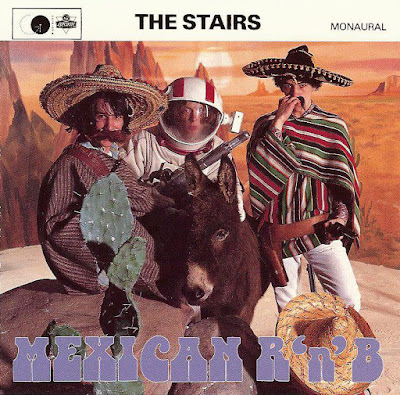 2.  Charlie Mingus – “Dizzy Moods” (1957)
Recorded in 1957 but not released until 1962, Mingus is quoted on the sleeve of Tijuana Moods as saying “This is the best record I ever made”. It’s difficult to put these things in any order and difficult to understand why such a fantastic LP waited in the wings for five years, although this was an incredibly prolific period with four other albums recorded and issued in 1957 alone.
[Comment from Monkey Snr: It was not issued by RCA for five years because Celia Mingus (his wife) sued RCA, and settled for $1200. I think it was about Debut (Mingus and Max Roach's label) issuing an LP by Thad Jones; RCA nicked the idea].

4.  Prince Love and his Royal Knights – “Don’t Want No War” (1962)
“Mr Castro, I’m talking to you”. Gotta hand it to young Sly Stone for cutting a dance record about the Cuban missile crisis.

6.  The Staple Singers – “This Is A Perfect World” (1971)
For the first time Al Bell and Stax took the Staples to Muscle Shoals to record, and their The Staple Swingers LP opens with the sound of machinegun fire, “God Save The Queen” played on a harmonium, and Roebuck Staples declaring “This is a perfect world, so let’s stop trying to make it what it’s not”. Powerful and rousing stuff even before Mavis takes up the baton.

7.  The Brand New Heavies – “Sphynx” (1990)
Although I saw the Brand New Heavies a fair few times in their early days – they were a great live band tapped into a strong funk, jazz and soul movement – I was pretty nonplussed by their debut LP when it eventually came out, playing it only a couple of times. This was probably due to preferring to listen to the JBs, the Meters, Charles Earland etc than a new band doing a copy. Twenty five later those considerations don’t apply and taken on its own merits The Brand New Heavies makes a strong summertime soundtrack.

8.  The Stairs – “Right In The Back Of Your Mind” (1992)
Smokin’ scouse big beat vowel mangling combo The Stairs are back! Or rather they will be when they play the Kazimier in Liverpool on 26 November. Details are sketchy at the moment and no other dates announced so get yer skins together and catch the 147. Hope they do this epic Stooges/Chocolate Watchband mash-up.

9.  The Nervous Rex – “(I Love Your) Psychedelic Curtains” (2009)
Zyd Hockey played this on his Fusion wireless show the other week and my toe was already merrily tapping away when my ears picked out the line “Your LP records by The Action and the Electric Prunes” guaranteeing its place in this month’s playlist.

10.  James Taylor Quartet – “Why Can’t We Get Along” (2011)
From The Template, the JTQ follow the one used by the Style Council trying to sound like the Isleys. Infectious little number this one.