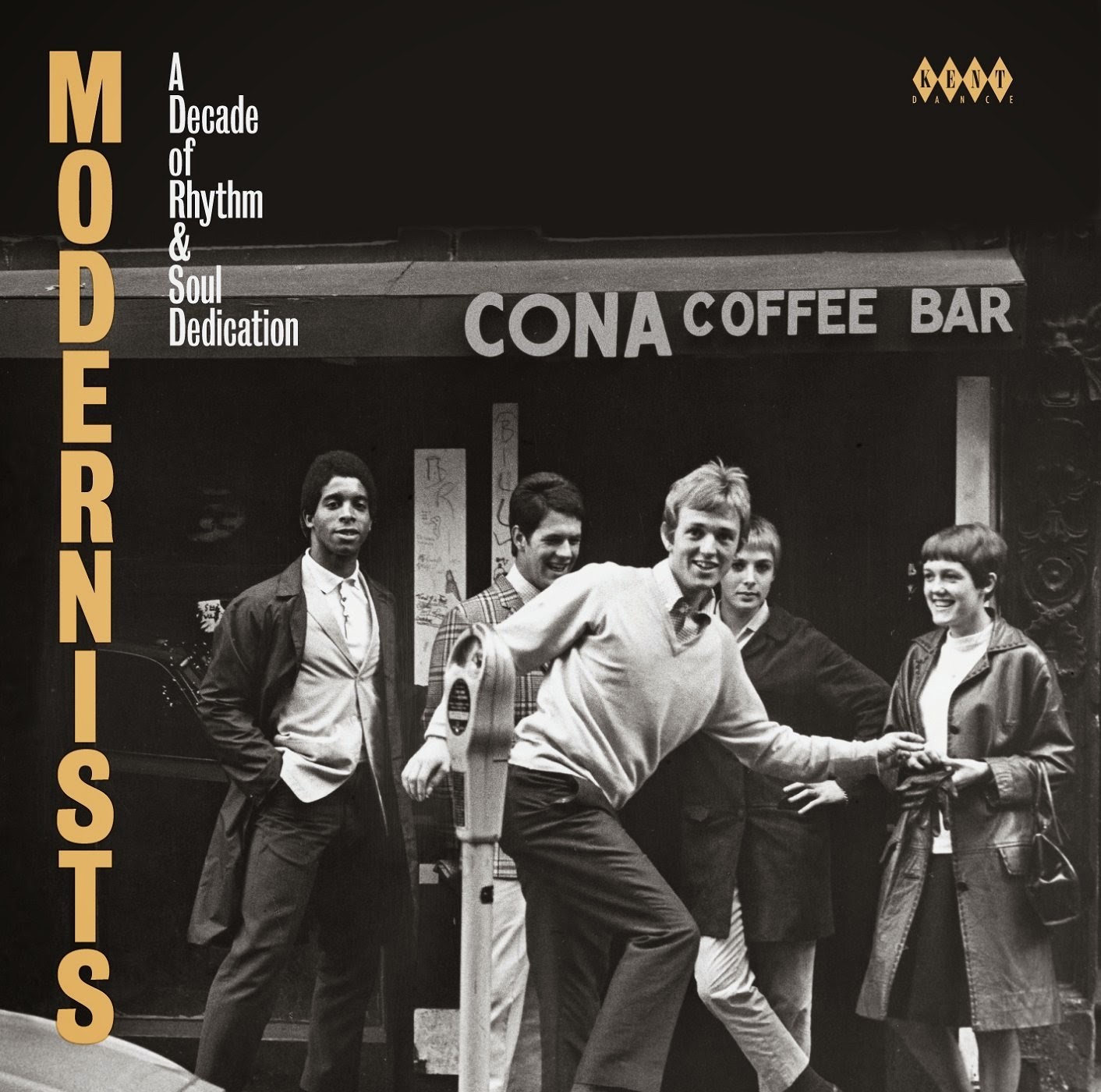 The 1965 cover image on Kent Records' new 24-track Modernists compilation features a quintet of young mods hanging around a coffee bar near Manchester's Twisted Wheel club which pounded to the happening new sound of soul and rhythm and blues. But as Ady Croasdell and Dean Rudland observe in their liner notes, the majority of records spun for mods throughout the country in the mid-60s came only via tracks given a UK release on labels such as London-American, Stateside, Sue and Pye International's R&B Series; imports from the US were few and far between. Modernists imagines which other singles might've made club playlists had they been more readily available.

The two opening tracks, from 1967, set the tone. "Soul Jerk It, Baby" by Jeb Stuart and Lewis Clark's "Dog (Ain't A Man's Best Friend)" both could break into a burst of "Land Of A 1000 Dances" at the snap of a well executed soul clap. Although Kent reference their collection as "rhythm and soul", it's more what is usually known these days as "club soul", and I think there's subtle difference: "club soul" being the traditional Atlantic/Stax-a-like soul that has fallen out of favour for new breed modernists who are even less keen to shingaling, jerk or pony than their ancestors, preferring the shuffle of heavier blues-based or popcorn numbers (age and stamina of the club goer might have something to do with that...). Therefore those who, like me, purchase CDs with an ear on finding potential new 45s for their DJ sets might come away with slim pickings to energise a current dancefloor (although the tracks by at least Clifford Curry, Lil Bob and Gene Burks have already done so) but there's still plenty to enjoy in an imaginary 60s haunt of wide-eyed chatterboxes.

Robert Moore's "Harlem Shuffle" is a corking alterative version which would get the shoes scuffed in any dark basement and Bessie Banks' "(You Should Have Been A) Doctor" fits exactly the rhythm and soul description with it's uptempo beat and soulful vocals. Songwriters back then didn't fear lawsuits against copyright infringement - as they damn well now in light of the Thicke/William vs Gaye case - so many tunes, if not the songs themselves, are familiar. Clifford Curry's "Good Humour Man" bears more than a passing resemblance to Jimmy Hughes's "Neighbor, Neighbor"; Oliver Morgan's "Hold Your Dog" is a barely concealed thief of Rufus Thomas's "Walking The Dog"; Little Eva attempts to go all "Papa's Got A Brand New Bag" on "Dynamite"; and Timmy Wilson's previously unreleased "Long Ways To Go" offers the chance to do the Block a la "Long Tall Shorty".

Lil Bob's "I Got Loaded" is something I spun out regularly ten years ago and with its jumpy Louisianan rhythm is a perfect record when crossing over from soul and R&B into Jamaican 45s or, as it does here into more 50s swing territory with John Fred and the Playboys' "Shirley". Also, although recorded in circa '65, Clarence Daniels & Obie Jessie's "Got A Good Thing Going On" which - although I'm a big fan of Young Jessie -  would've sounded very dated had it been aired at the Twisted Wheel.

The Pac-Keys "Stone Fox" is at the classier end of the scale with the ostracised Packy Axton showing his ma and uncle at Stax he could still cut a cool mod jazz R&B instrumentals without their help; and "Cat Dance" by The In Crowd similarly offers a cut that could nicely curl up at home on Kent's sister Mod Jazz series; as would Paul & Rick's organ blues "After Hours". In addition to the aforementioned foxes and cats, there's a veritable soul-zoo of animal magic here: three dogs, a cat, a crow and two monkeys. Chickens notable by their absence.

The standout track though is "Tingling" by Eddie Giles from 1968: slower, brooding, and more in keeping with the atmospheric club feel of today it sounds a little out of place on Modernists, which demonstrates that although there's a core mod club sound it's one which, over fifty years on, is still gently evolving.


Modernists: A Decade of Rhythm & Soul Dedication is released on CD by Kent Records. Out now.
Posted by Monkey at 11:20