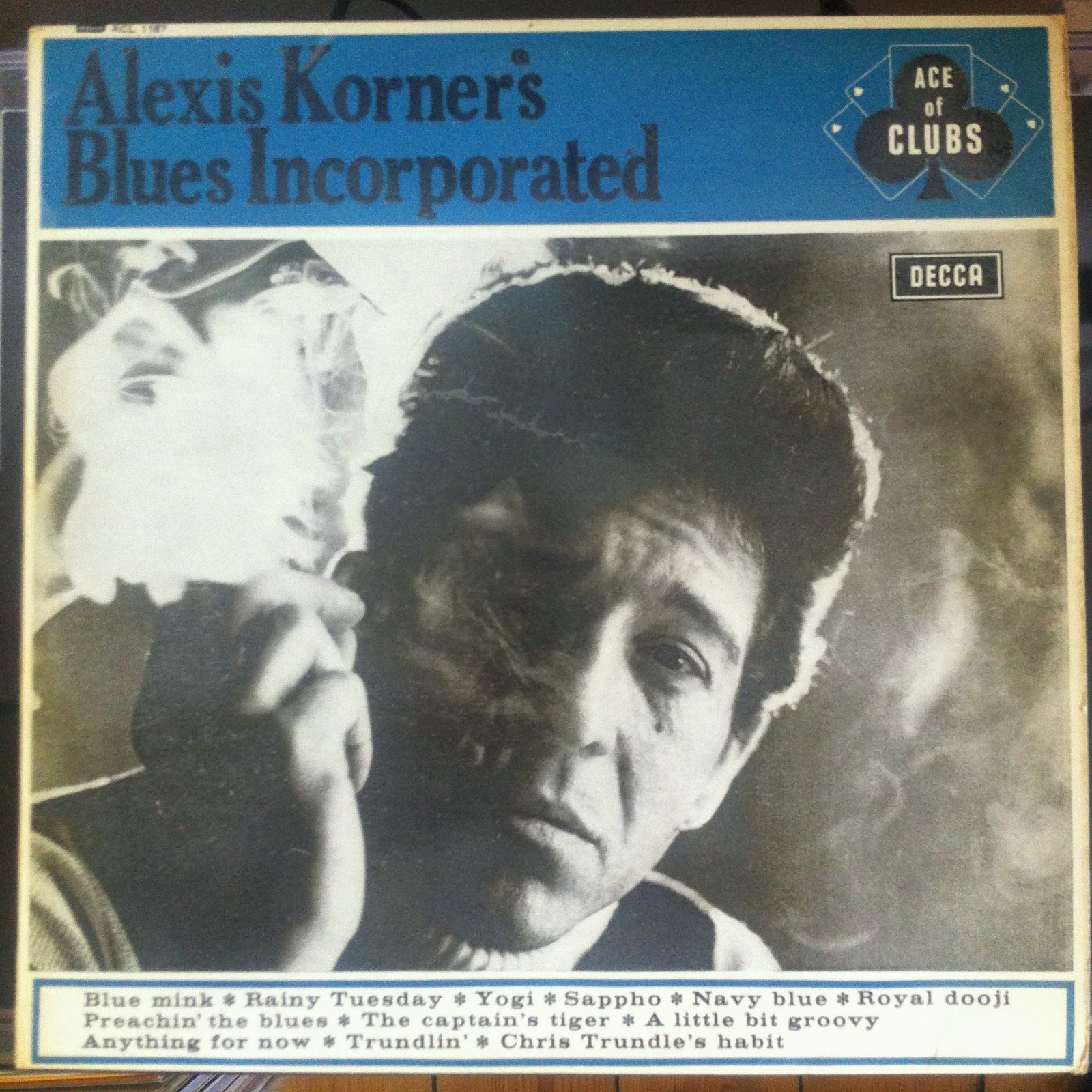 1.  Wynonie Harris – “Keep On Churnin’ (Til The Butter Comes)” (1952)
“First comes the milk/ then comes the cream/ takes good butter to make your daddy scream/
Keep on churnin’ ‘till the butter comes…” shouts Mr. Harris.

2.  Alexis Korner’s Blues Incorporated – “Preachin’ The Blues” (1965)
Adapted from Robert Johnson’s 1936 recording, Korner plays a bouzouki by sliding a door key along the strings and Phil Seamen adds “African-style” drumming. Mississippi blues goes Greek via Ealing. Album (above) kindly donated to the cause by Monkey Snr.

3.  The Answer – “I’ll Be In” (1965)
The Answer were from Berkeley High School, California and the snappy garage-twang of “I’ll Be In” plus the moody blues with a hooky chorus flip “Why You Smile” made this a great double-sider for White Whale records.

4.  Jimmy Smith & Wes Montgomery – “Night Train” (1966)
All aboard! From their album The Dynamic Duo, Jimmy and Wes are joined by a swinging 16 piece big band. James Brown would’ve loved the result.

5.  The Byrds – “You’re Still On My Mind” (1968)
The recruitment of Gram Parsons turned into only a short-lived affair but only eight months after The Notorious Byrd Brothers, the Byrds displayed their massive bollocks in releasing the full-on country album, Sweetheart of the Rodeo, to a 1968 market. “You’re Still On My Mind” was written and released by Luke McDaniel in 1959, and with lyrics about honky tonk jukeboxes, “an empty bottle, a broken heart, and you’re still on my mind” was surely an influence on Merle Haggard whose “Life In Prison” is also covered on the record.


6.  Steve Stills & Al Kooper – “Season Of The Witch” (1968)
The Super Session album credited to Mike Bloomfield, Al Kooper and Stephen Stills is slightly misleading as not all three played together. On side one Kooper and band are joined by Bloomfield; and on side two it’s Kooper and Stills. Both are great but Stills nicks it on points thanks to making Dylan’s “It Takes A Lot To Laugh, It Takes A Train To Cry” sound like Buffalo Springfield meets the Monkees; the phasing frenzy on “You Don’t Love Me”; and then this eleven minute epic in which Donovan invents the jam session. Especially love the bit when the (over-dubbed) horns come in.

7.  MC5 – “The American Ruse” (1970)
If ever there was an album which failed to capture the essence of a band, it’s the MC5’s Back In The USA; scorn of their thrilling sonic power as a live act it’s bafflingly thin sounding record. That said, taken on its own merits, I do still like it as a Chuck Berryesque rock and roll record and “The American Ruse” hinted at what the band were truly like.

8.  The Last Poets – “Niggers Are Scared of Revolution” (1970)
Warning: Care should be taken when playing The Last Poets eponymous LP as the liberal use of the N-word (and F-word) could cause misunderstanding with neighbours. Three angry voices of East Harlem, symbolically formed on what would've been Malcolm X's birthday and led here by Omar Ben Hassen, taunt and call the bluff of their people.

9.  Leon Spencer – “Give Me Your Love” (1973)
Organist Leon Spencer’s Where I’m Coming From album for Prestige features two original compositions plus dead on the heavy funk versions of Stevie Wonder’s “Superstition”, Four Tops’ “Keeper of the Castle”, Marvin Gaye’s “Trouble Man” and this rumbling take on Curtis Mayfield‘s Superfly classic.

10.  New Order – “Weirdo” (1986)
New Order’s 1989 Technique is one of my very favourite albums. So much so I’ve always felt their others records noticeably inferior but after digging out Brotherhood the other day it’s not as far off as I remember.
Posted by Monkey at 11:13