I’ll TAKE YOU THERE: MAVIS STAPLES, THE STAPLE SINGERS, AND THE MARCH UP FREEDOM’S HIGHWAY by GREG KOT (2014) 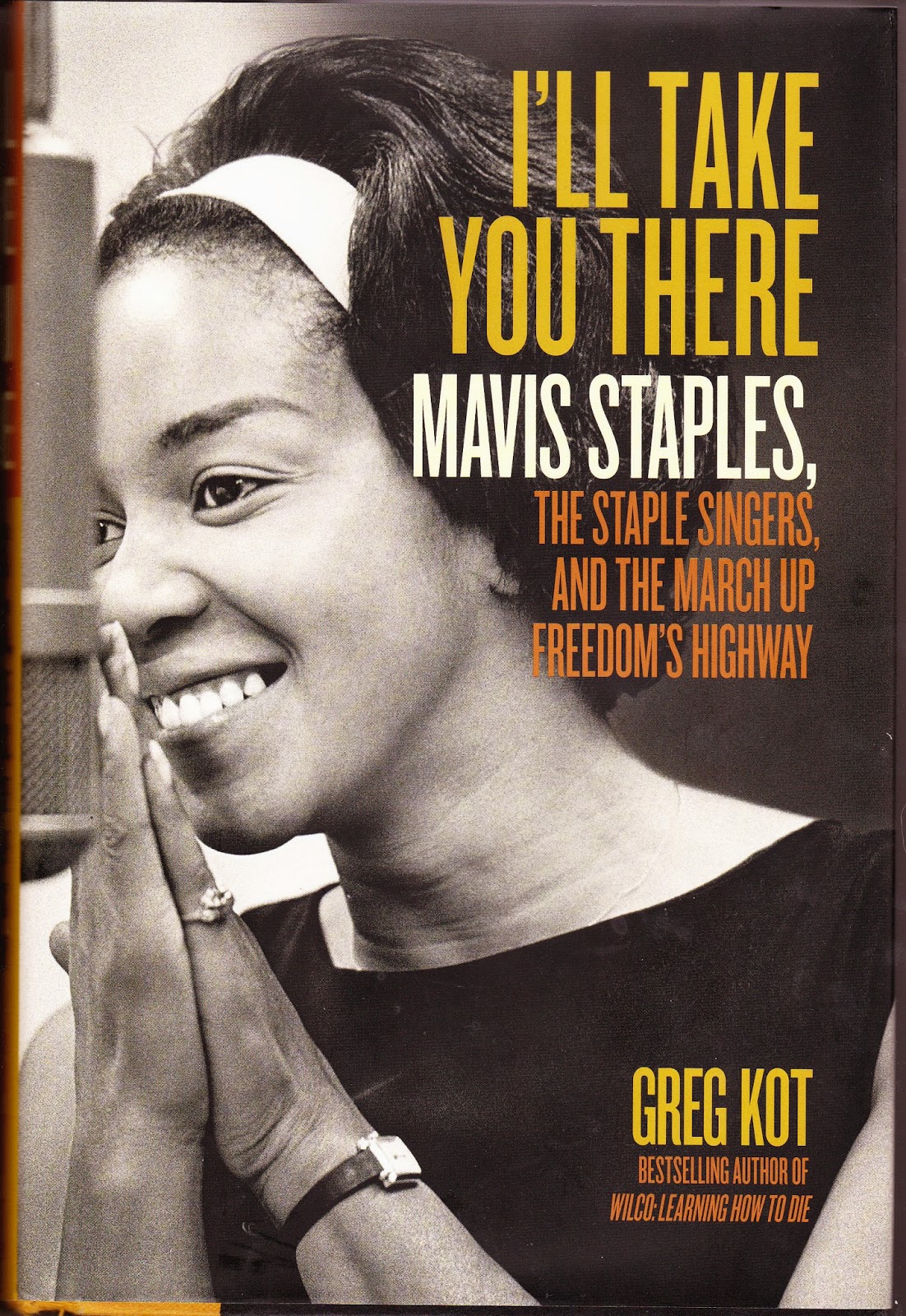 The title gives the impression Greg Kot’s new book focuses on the Staple Singers’ contribution to the civil rights movement of the 1960s but that’s only one element as I’ll Take You There provides an overview of the whole career of the Staples family: tracing how - under the leadership of patriarch Roebuck “Pops” Staples – they gradually and cautiously moved from family gospel singers in the 1950s; to embracing folk, protest and message songs in the 60s; to becoming the most successful group on Stax during the early 70s; and then, after years in the wilderness and the death of Pops in 2000, how Mavis Staples’ star rose again with a series of highly acclaimed albums and concerts since 2007.

Kot interviewed Mavis, Yvonne and Pervis Staples extensively as part of his research so with their assistance I’ll Take You There reads like an official biography and with 43 short chapters it has an episodic feel. The reader gets a strong sense of the family characteristics and bond – they all come across as completely lovely people, which I’m sure they are, you can hear it in their music – but issues of a personal nature are washed over. Mavis’s failed marriage is explained away in a couple of lines and although she reveals a little more about her relationship with Bob Dylan than previously known it invites more questions. Recurring themes throughout the book are integrity and trust – vitally important, especially where Mavis is concerned – so it is understandable how the author didn’t wish to intrude after winning the confidence of the family when dealing with more sensitive issues, including the tragic death of non-singing sister Cynthia. Mind you, the Staples are one of the straightest families in the rock history so those looking for a gossipy tome have already knocked on the wrong door.

The focus is therefore very much on the music, with one eye on the business. The early chapters recounting the Staples driving around the country in their car to sing at churches are especially evocative. It also showed how lucrative this could be. When “Uncloudy Day” took off in 1957 – with Pops’ spooky tremolo guitar sound and Mavis’s big old mama voice emanating from her young little bitty body - it allowed Pops to quit his $65 a week job at the steel mill; the family were coming home from appearances with hundreds of dollars stuffed in their pockets and would go on to play churches holding three thousand people.

But the choices the family made weren’t financially driven, they -following Pops’ lead – were about singing songs with a strong positive message, whether overtly gospel in nature or, later, moving into a more secular field. Even then this came with firm, if not fixed, boundaries and lyrics had to be believed before given the go ahead for Mavis to pour herself in. This philosophy, which stood them so well, was relaxed (after the younger members pleaded with Pops) sufficiently to record Curtis Mayfield’s soundtrack to Let’s Do It Again, the fruity title track giving them a number one single in 1975. That though was the beginning of the end of the Staple Singers as a true force although they continued to soldier on, but the times weren’t as accommodating for their style or for an act that had already been making records for twenty years.

Kot provides commentary on all the albums they made together and individually, and whilst at times (particularly towards the latter stages when the narrative becomes less interesting) it reads a little like one album review after another, it does give a full account of their music. It’s a shame there’s no full discography included as the book highlights just how unavailable much of the Staples catalogue is. Getting hold of their early Vee-Jay recordings and all the Stax stuff is easy enough but what about the records they made in between for Riverside and then Epic? I can’t remember the last time those were issued. Good music books prompt the reader to re-listen or seek out recordings for the first time; I’ll Take You There does that in abundance (I've already begun filling in gaps).

As a reluctant solo artist, Mavis Staples’ recent albums – One True Vine, You Are Not Alone, Hope At The Hideout and We’ll Never Turn Back – mixing new songs and revisiting ones cut in those early gospel years sit among the best records of her career, ensuring that for the close-knit Staples family and the listener fortunate enough to be fall for such inspirational, heartfelt music, rich with honesty and positivity, the circle remains unbroken.


I’ll Take You There by Greg Kot is published by Simon & Schuster, priced $26 (not yet published in the UK).
Posted by Monkey at 09:56