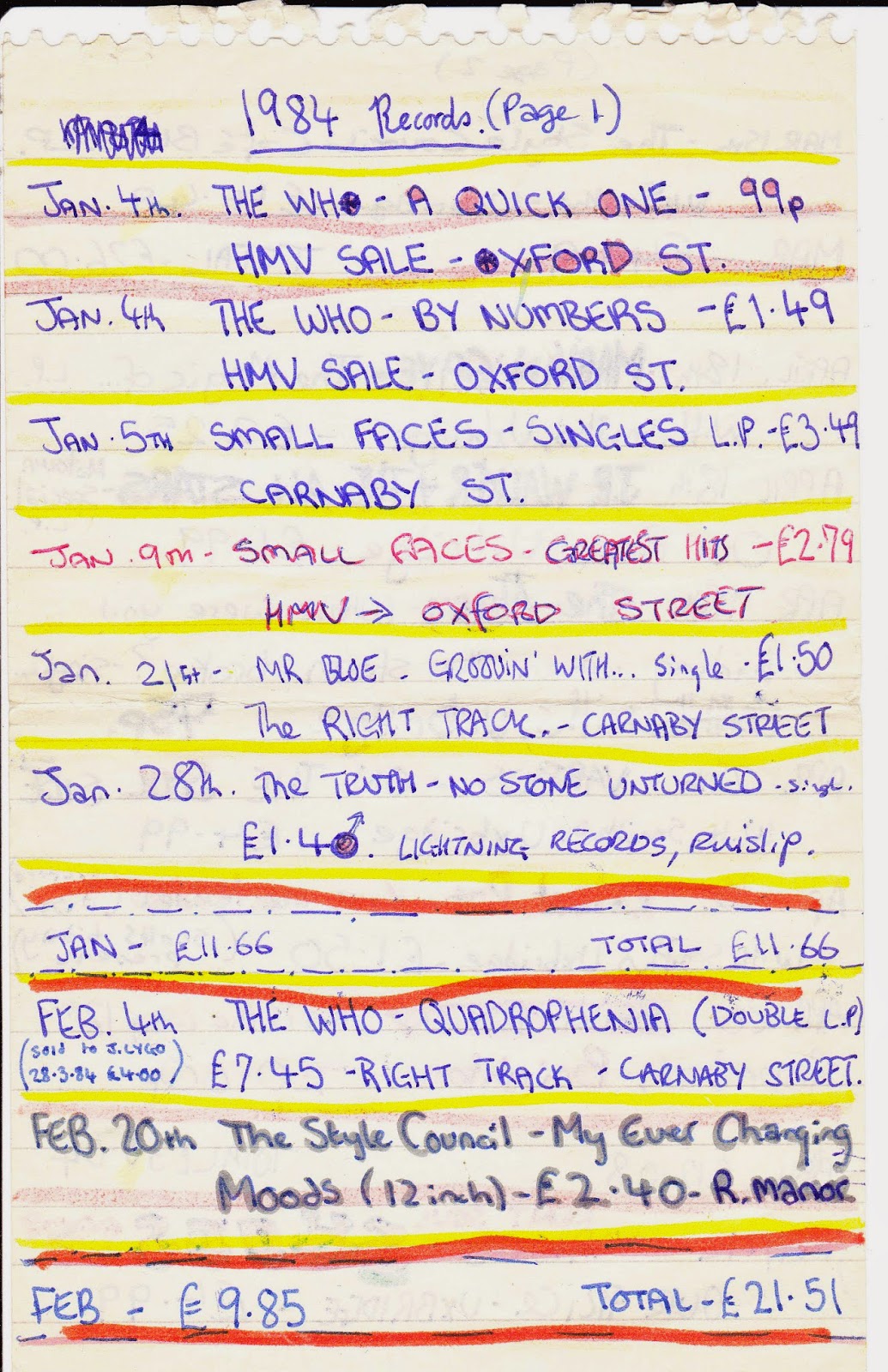 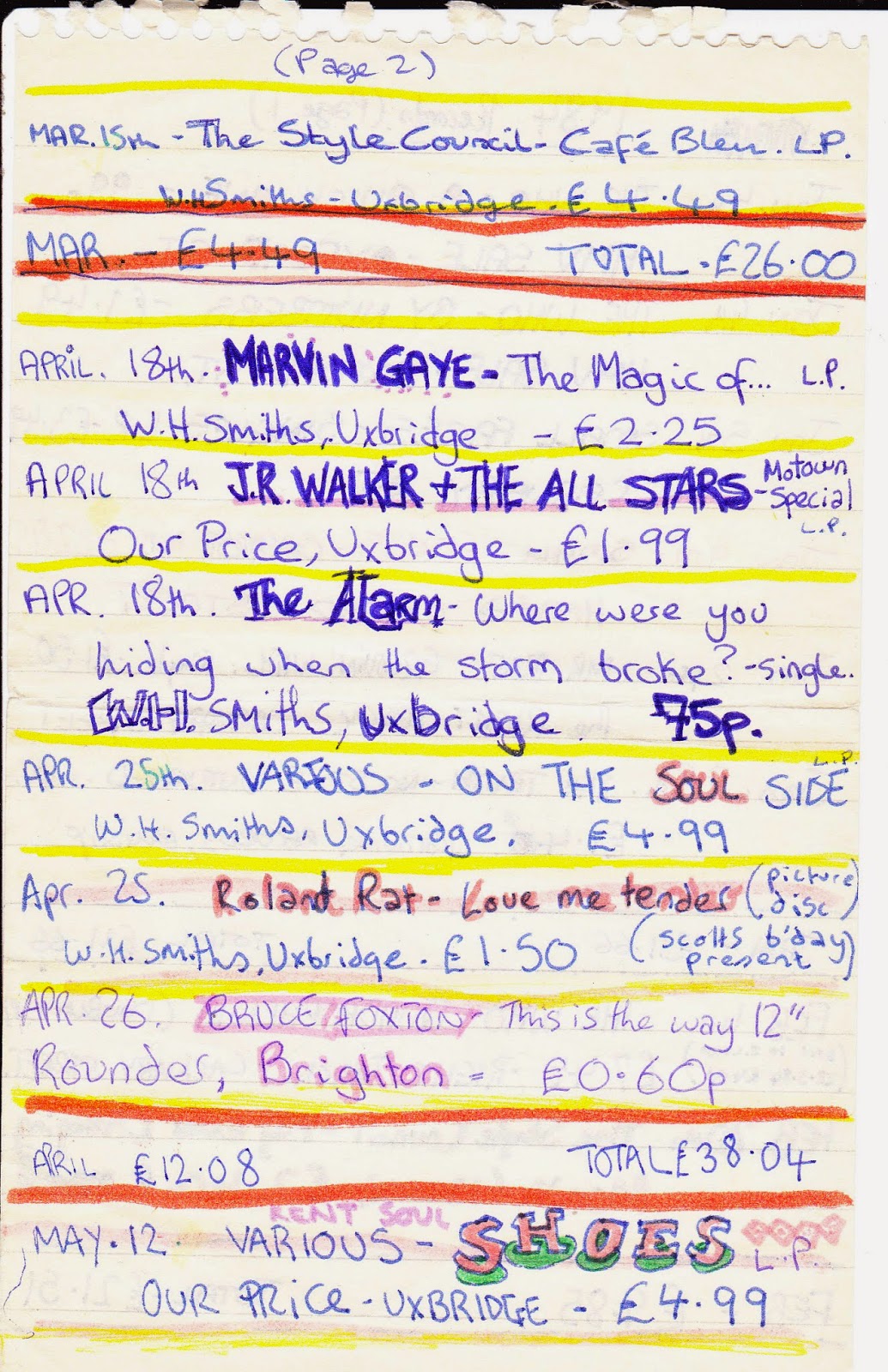 It is 1984 and a fourteen year old me is already habitually recording, cataloguing or listing my interests. I’ve earlier examples (for another day perhaps) and Monkey Picks is simply the latest method of documenting events.

For whatever reason, thirty years ago I decided to keep note of every record I bought. Not only that, but to include where I bought it and how much it cost, and to keep monthly and cumulative expenditure totals (although, typically, I didn’t quite finish it off by calculating the final total in December). Quite why I did all this, I’ve no idea, and I only did so for a year before moving on to a different project in 1985. Maybe I knew I’d be stuck for a blog post in 2014.

As you can see almost everything was Mod or 60s related (interchangeable terms in my young mind) with only a few notable exceptions: The Alarm, The Smiths and even Frankie Goes To Hollywood’s “Two Tribes” which was such a massive record that summer and cut across the youth cult divide.

Also of interest (to me at least), the list pinpoints the precise moment I developed an interest in northern soul with my first purchase of a Kent Records’ collection in April, On The Soul Side, followed by Shoes two weeks later. Those albums – that entire Kent series - were game changers for kids like me who didn’t know about, or much care for, historic tales of the Wigan Casino but discovered the likes of The Impressions, Bobby Bland, Maxine Brown and Patrice Holloway from these mind-blowing LPs that could easily be bought on suburban high streets.

As for Roland Rat’s “Love Me Tender”, I wonder if my little brother still has it. 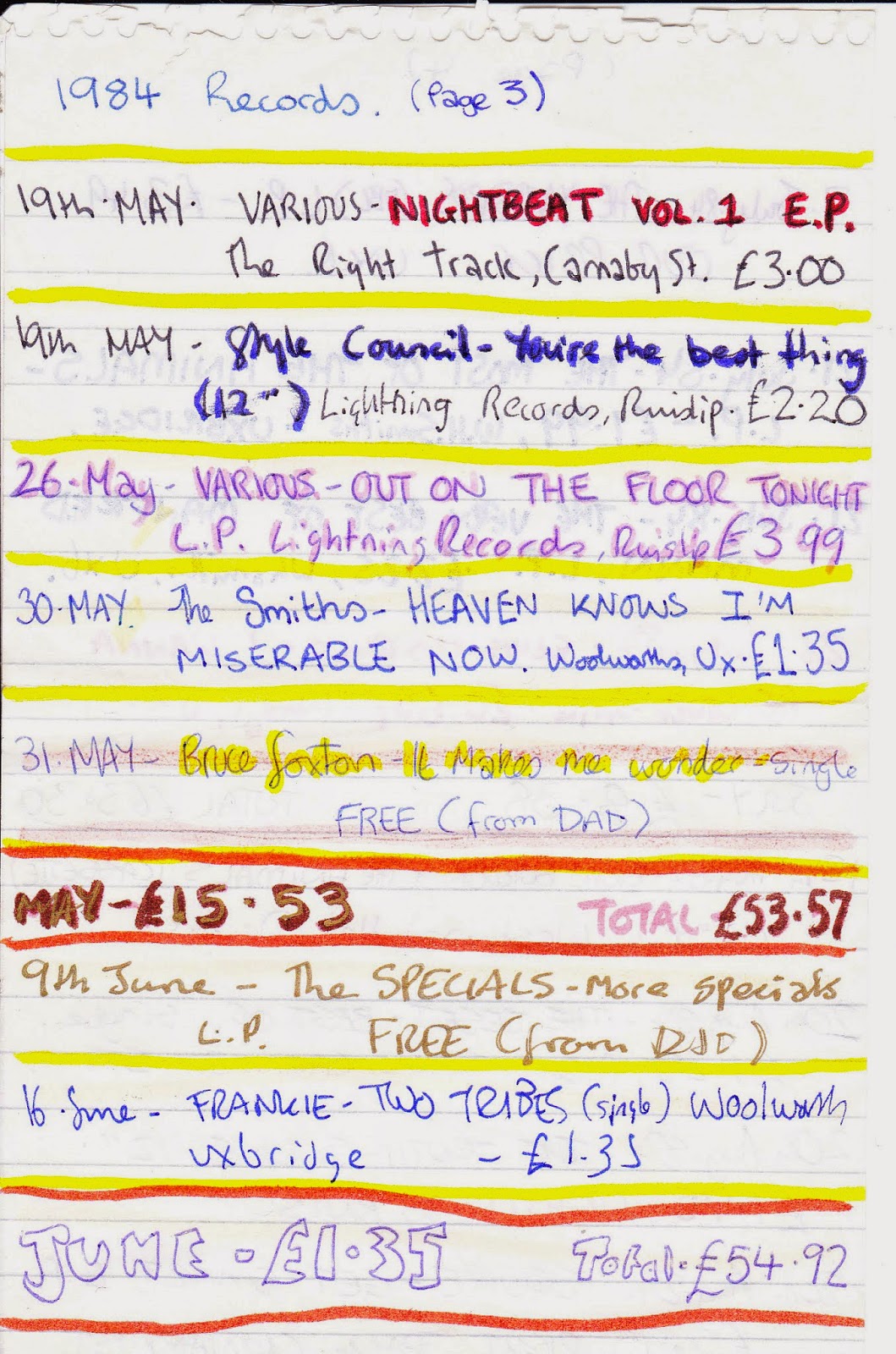 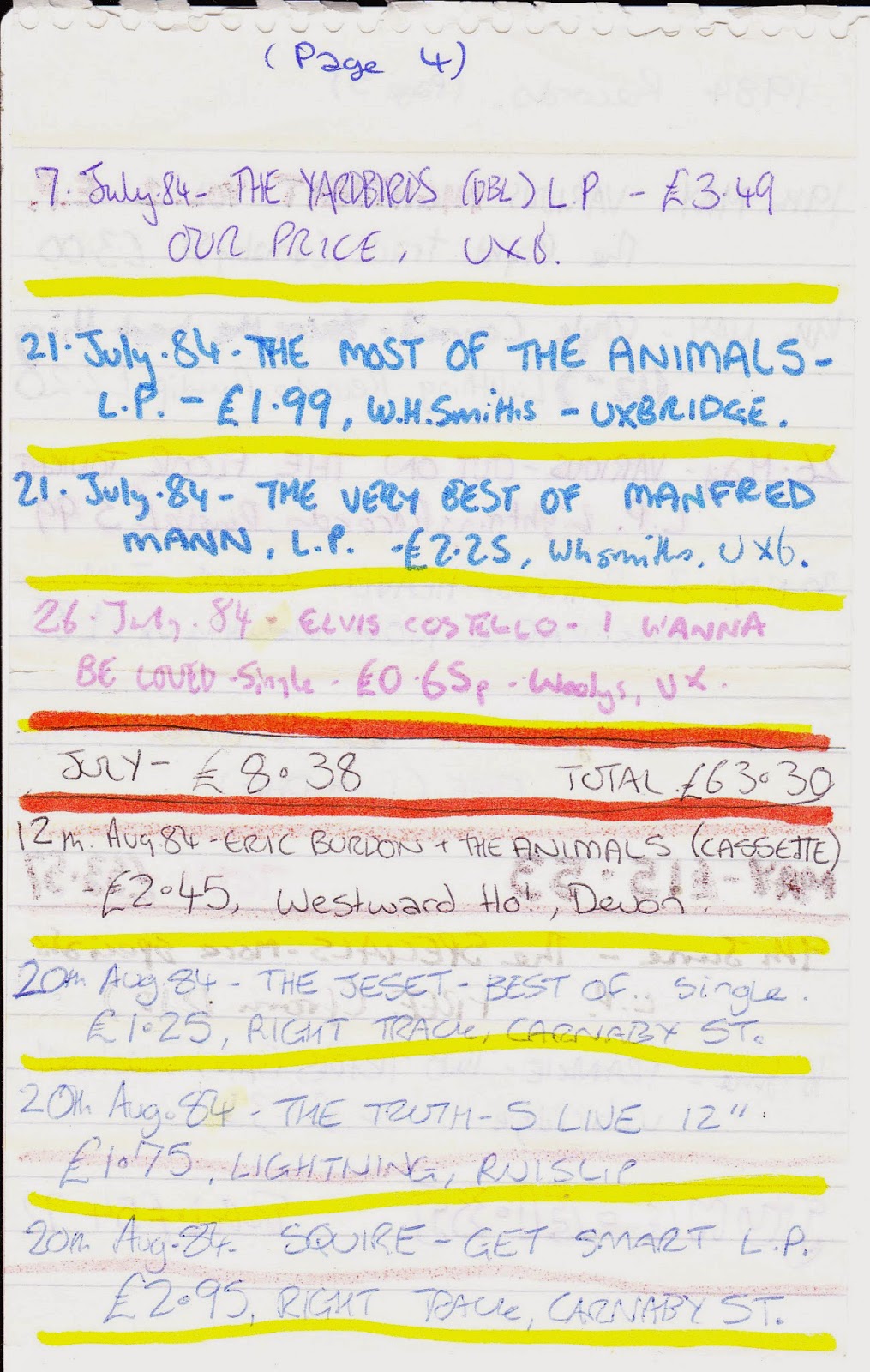 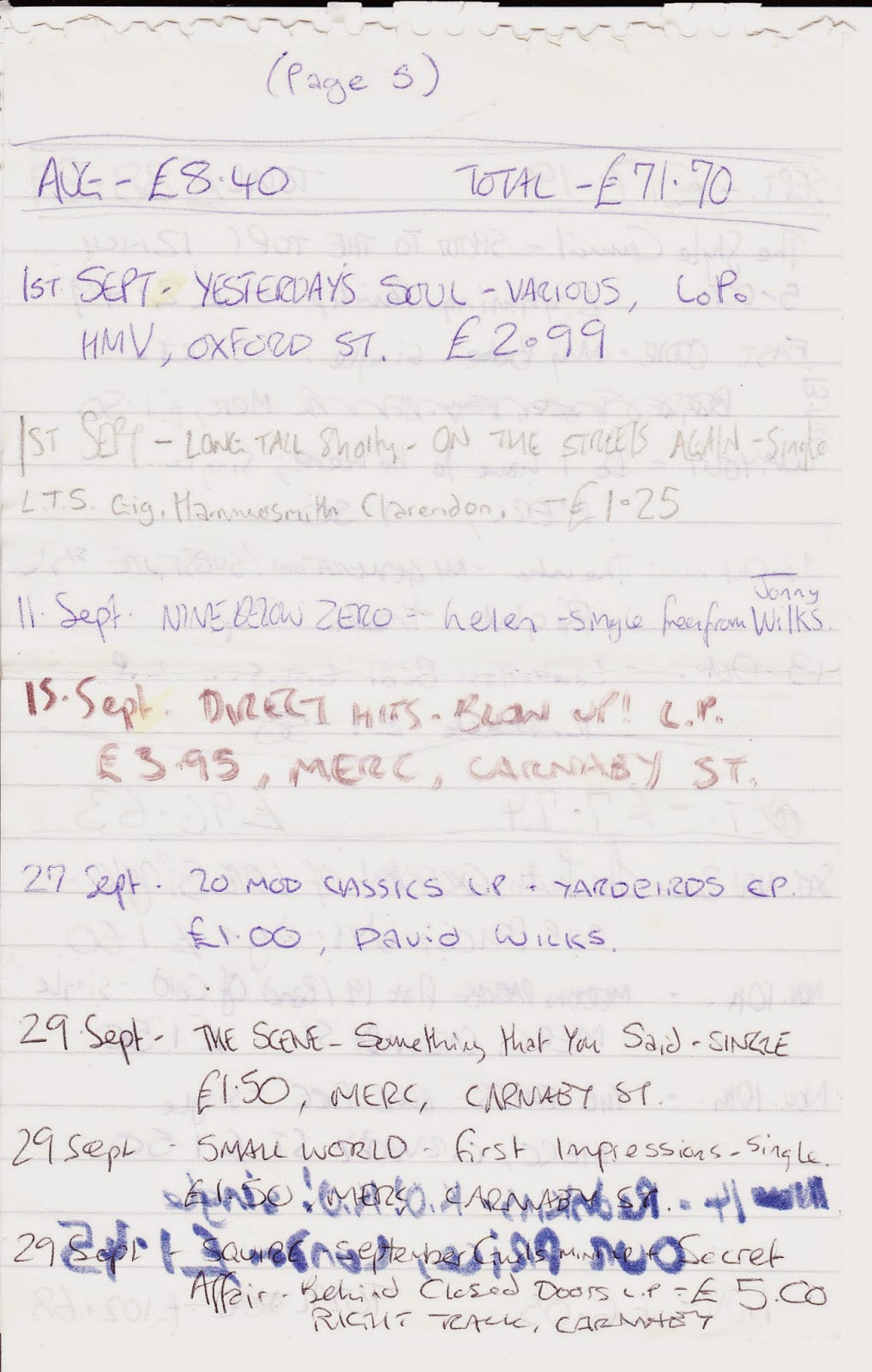 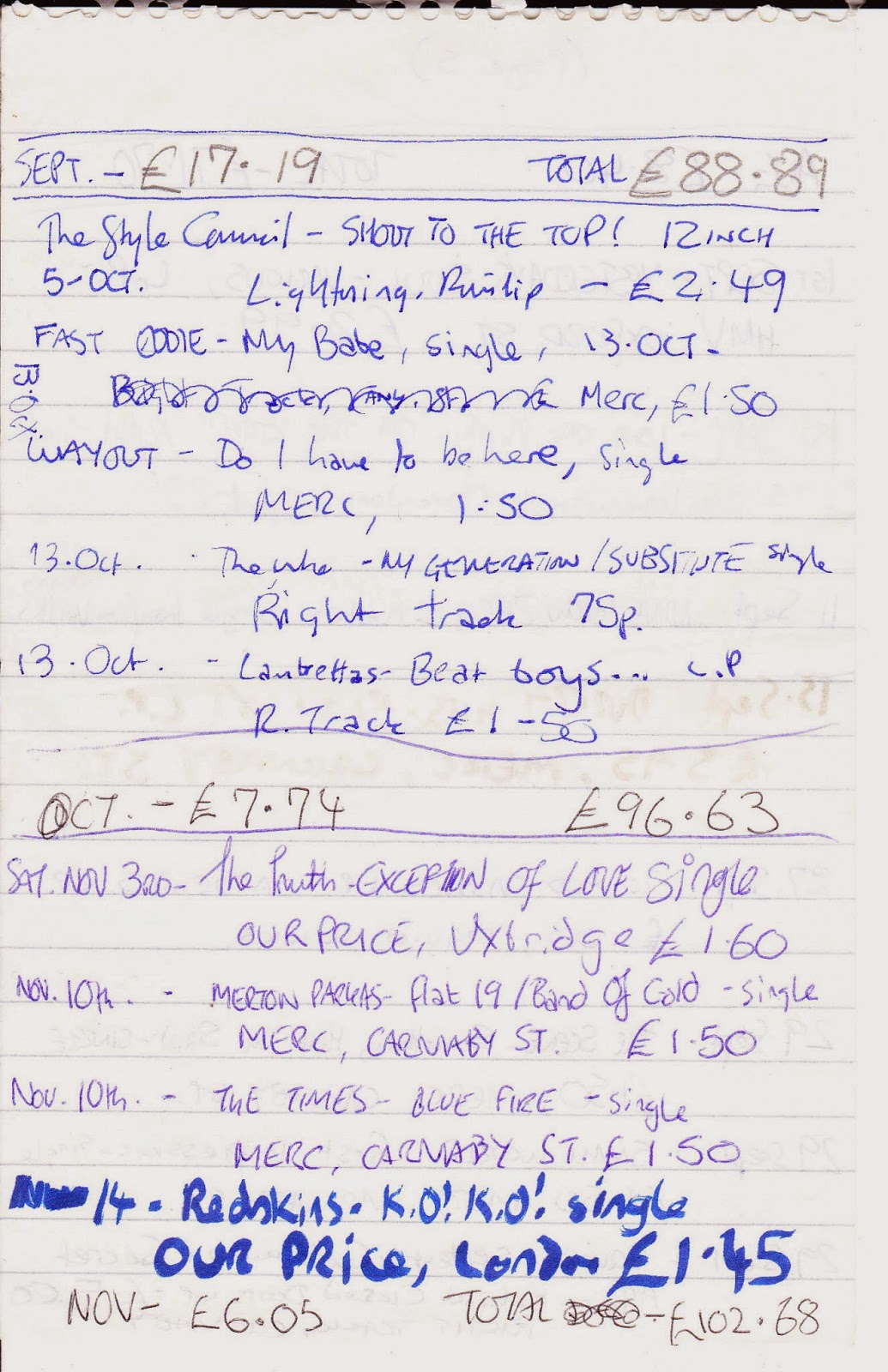 The lists can be viewed easier by clicking on them.
Posted by Monkey at 16:46

Labels: 1984, confessions of a teenage mod, mods, record collecting, sad people who make lists of everything