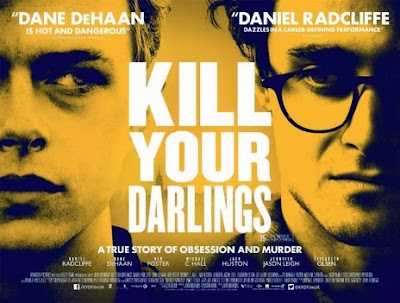 Another year, another Beat Generation film. Following Walter Salles’ disappointing adaptation of On The Road, John Krokidas makes his directorial debut with a movie based on the true story of Allen Ginsberg’s first year in New York and the killing by Lucien Carr of David Kammerer.

When young Ginsberg (played by a wide-eyed, round spectacle wearing, boyish Daniel Radcliffe) arrives at Columbia University in 1944 and questions his lecturer’s insistence that poems without rhyme, meter and conceit are like untucked shirts he soon finds himself adopted and in awe of the only other student daring to challenge convention and tradition: the wild, handsome and streetwise Lucien Carr (Dane DeHaan). Possessing verve, a brilliant mind and a strong manipulative streak, Carr was looking for a writer to capture his ideas and in Allen he found the perfect accomplice.

Shy and innocent, Ginsberg’s excitement and confidence grows when encouraged in the pursuit of a literary “New Vision” by Carr (and the sexual tension between them) and the much older William Burroughs (Ben Foster) who is keen to advocate the derangement of the senses and aspiring writer and football playing jock Jack Kerouac (Jack Hudson). Together - all at least ten years away from any work which would make their literary name - they grandly adopt the title “the Libertine Circle” and indulge in practices suitably applicable to their cause.

The central event of Kill Your Darlings – Carr stabbing his long-time stalker and sexual predator David Kammerer with a pocket knife and throwing his body into the river to drown - is well known to Beat readers (Jack, Bill, Allen and others all wrote about it with varying degrees of accuracy) but unlike On The Road there is no sacred text, which makes the transition to film easier. Unlike Salles, who attempted to force a square peg into a round hole, Krokidas’ film stands on its own and works well when taken purely as entertainment. It has characters, a straight forward narrative, and is reasonably well acted. Those who don’t know the Beats from a bar of soap can watch and enjoy it.

There are factual inaccuracies – as in any “based on a true story” film – but I preferred to gloss over those. But, unlike On The Road, this didn’t feel over stylized (the occasional use of modern rock music in a 1940s-set film was jarring, although "Don't Look Back Into The Sun" by The Libertines over the end credits was a nice touch) and for a bunch of cliquey know-it-all university students none of the characters were particularly annoying. As much as they all fascinate me I'm convinced in "real life" - bar Kerouac and Burroughs - the Beat crowd would've annoyed the hell out of me with their pretentiousness.

Kammerer’s death and the reaction by the others has always intrigued me. Being on the edge of their scene he was well known to all of them (Burroughs and Kammerer had been friends since kids in St Louis) yet Kerouac helped dispose of the dead man’s glasses and Burroughs did little more than shrug and suggest Carr get himself a good lawyer and turn himself in. Both were arrested as accessories to murder. Ginsberg is the only one shown to wrestle with his conscience as Carr requests his help in his trial.


This enjoyable film shows the fledging Beats coming together and Ginsberg, in particular, begin to find his voice. More importantly it makes the Beats - with their thirst for a "New Vision", a new way of writing and living - look like something worth investigating further. Do it.

Kill Your Darlings is in cinemas now.
Posted by Monkey at 18:11