GRAHAM DAY & THE FOREFATHERS, THE HIGHER STATE and THE AARDVARKS at the BETHNAL GREEN WORKING MEN’S CLUB 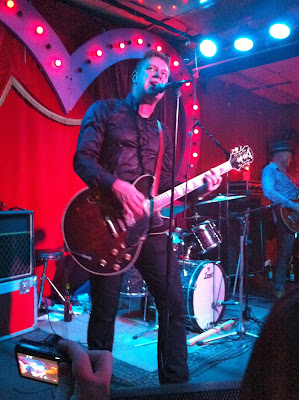 When Graham Day, Allan Crockford and Wolf Howard reunited to play as The Prime Movers at the Blues Kitchen in May – and then tore a whacking great hole through Day’s songbook – it got Day’s juices flowing after a five year absence. What started as a couple of special shows under a previous moniker has now developed into something hopefully more substantial: a new name, a fresh start but - for now at least - familiar songs from The Prisoners, The Prime Movers, The SolarFlares and The Gaolers.

First up though, taking a similarly nostalgic approach to the Forefathers, were 90s Mod scene attractions The Aardvarks. Cherry Red this year issued Sinker, Line & Hook: The Anthology 1987-1999, which by accident or design has prompted the Ealing dandies to rekindle former glories. Always taking from a slighter later sixties period than their closest rivals The Clique, The Aardvarks dusted off their old Wimple Winch, Easybeats, Fleur De Lys/Sharon Tandy and Who covers but these were overshadowed by their own material, especially “Buttermilk Boy” and the Graham Dayesque “I Threw Her A Line”.

The band may sport a few grey hairs these days - singer Gary is now less Scott Walker and more Roy Walker (please forward all complaints/credit for that remark to Mrs Monkey, I’m in no position to comment...) – but they did enough to bring back memories of their amazing 1995 Barcelona gig which still gets talked about along the length of the Uxbridge Road. There was surprisingly no “Arthur C. Clark”, which I always think of as their signature song, but maybe next time.

The Higher State also look back but not to their own past. Marty and Mole, as half of The Mystreated, played on bills with The Aardvarks at the St John’s Tavern and Boston Arms twenty years ago but now showcase tracks from their fourth album, The Higher State (matching the score of their previous combo). With chiming guitars and three-part harmonies they gained in momentum, switching between unadulterated folk-rock and intelligent garage-punk. By that I mean avoiding the usual “running round town/tryin’ put me down” garages clichés, although as Marty acknowledged when muttering an introduction to “Potentially (Everyone Is Your Enemy)” there is seldom an upbeat message. “Always so negative,” he sniggers.

Watching The Higher State finish off with a blissfully sunny sounding “Song Of The Autumn” was to be transported to Los Angeles in ’66, to the Troubadour, to the Whisky A Go Go – a far cry from a scuzzy, down-at-the-heel East End working men’s club in 2013.

I expected Graham Day & The Forefathers to romp through their collective back catalogue and that’s exactly what they did. The Prime Movers’ “Good Things”, followed by the lesser-spotted Prisoners B-side “Promised Land”.  There were Gaolers songs (“Get Off My Track”) and a handful of SolarFlares numbers (“Mary”  etc.).

The absence of an organ didn’t matter (I could still hear one in my head) as the Medway powerhouse trio drove through in typically hard hitting style. Day, crunching out his riffs, his purple shirt soaked through to the skin, gets top billing but Crockford and Howard’s contribution to that sound should never be underestimated. They crashed, banged and walloped anything and everything within striking distance. It would’ve been easier to bash a hole in a prison wall than find a weakness in these monumentally tough slabs of songs. There was no let up. A quick catch of breath and then BANG, off again.

I wasn’t taking full notes as I didn’t want the distraction but jotted down the Prisoners ones as I knew I’d forget. “Better In Black”, “Creepy Crawlies”, “Whenever I’m Gone”, “Be On Your Way”. They kept coming. “Hurricane”, “Love Me Lies”, “Coming Home”. I only had a small scrap of paper. “I Am The Fisherman”, “Reaching My Head”. Blimey. And then the finale, “Melanie”. Not only were people cheering, they were dancing. At a gig. In London. Is this allowed? Incredible scenes.


Next stop is back to the old Prisoners haunt of the 100 Club on Saturday 8th February. It’ll be great like this was. There’s no immediate rush for new songs as there’s enough oldies to chop and change but on this form it’s a tantalising thought for the future.
Posted by Monkey at 17:03