This two-minute clip is from a must-see documentary A Year In The Life made for the BBC by Paul Watson during 1968 and 1969 which follows Brighton pop group The Span (aka Mike Stuart Span, best known for their "Children of Tomorrow" 45) and their bid for stardom.

The stark, cynical realities of the music industry are best summed up by the television producer who books them yet says, “This particular record is like most of the other rubbish that’s turned out by the pop world; it’s ordinary, dull, silly and very predictable”.

Shifty managers come and go, they change their name to Leviathan (very 1969), yet by the time the film was broadcast in September they had spilt up, deciding they could earn more money labouring on building sites.

To view a half-hour edit of the film (and you really should) see Adam Curtis’s blog article Between The Gutter and the Stars which also features an interesting film Gene Vincent’s 1969 trip to the UK.


Since posting this yesterday, I’m grateful to Span vocalist Stuart Hobday for getting in touch with the following background information:

“Just a couple of points you might like to know about this clip. The song, written by Ken Howard and Allan Blakely (who wrote all the hits for Dave See, Dozy, Mick & Titch) was recorded at Radio Luxembourg studios in London and produced by Albert Hammond (It Never Rains In Southern California etc). It was universally hated by the group but our previous single Children of Tomorrow had not sold so we were persuaded to release it by our manager.

At the time of recording CoT we had also recorded a number of demos of similar material, and it was these recordings that our manager had originally taken to Tony Palmer, the TV producer who you see in this clip. He liked what he heard and he booked us when our new record was due to be released. Of course the new record was nothing like CoT and he was, shall we say, underwhelmed; hence the acerbic comments about the song and the manager – both of which were, of course, true.

One more fact – the documentary was actually called ‘Big Deal Group’ and was transmitted first in the series ‘A Year In The Life’. It was actually 50 minutes long (not 30 minutes) and was shown again over the Christmas period in 1989, along with one or two other programmes from the series, under the heading ’20 Years On’. This was an updated version and included contemporary interviews with the members of the group on how their lives had changed. The Adam Curtis blog article is an edited-down version of the original programme from 1969.”

For more on the band see their informative website Mike Stuart Span & Leviathan. 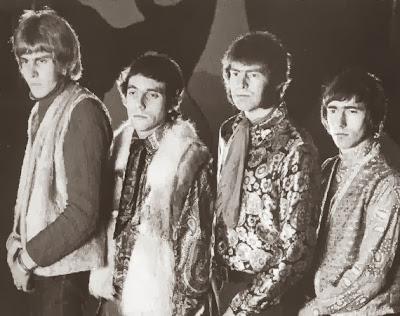