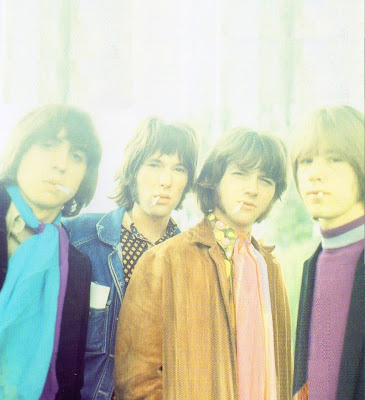 Not every photographer in the Swinging Sixties had the imagination of Bailey, Duffy or Donovan as shown by this picture of The Smoke. "'Ere lads, stick a fag in yer mouth, lovely, that's beautiful."

I've said it before but like The Action and The Creation, The Smoke existed in that idyllic period between mid '66 and early '67 when hair and sideburns were longer but not stupidly excessive; trousers were cut to sit on the hips with the correct amount of kick in the flare; and shirts added colour and patterns that still worked with the minimum of fuss. It was a blink-and-you'll-miss-it moment in fashion as only a few months after this 1967 photo The Smoke had succumbed to kaftans, beads and moustaches. A sad day.

I'd not seen this photo before today but it's pretty close to perfection. Mick Rowley, Mal Luker, Zeke Lund and Geoff Gill; I salute you all.
Posted by Monkey at 17:13