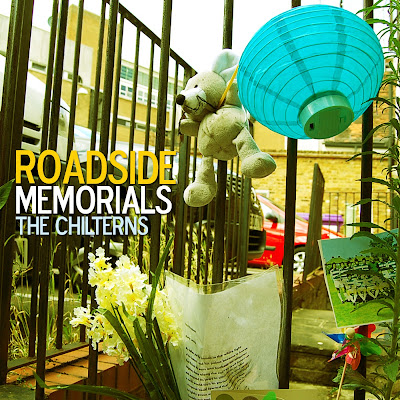 Back in 2010 a girl cycling to work was killed by a lorry outside our local pub. A white “ghost bike” was fixed to the railings and flowers, photographs, candles and nick-knacks created both a memorial and a safety reminder for motorists, cyclists and pedestrians using the roundabout.

This remained in place (with regular fresh flowers) until earlier this year when the council removed it after a complaint from the guy who runs the dry cleaners. He’d witnessed the tragedy and told television reporters he didn’t want a visual reminder every day yet someone from the council revealed they’d received a complaint on “aesthetic grounds” and were therefore forced to act. After consultation with the girl’s family the bike and memorial were removed but the episode created division within the small village community and a change in dry cleaners for some.

Heaven forbid the same fate awaits The Chilterns but should they lose their life on the side of a road in their Uxbridge neighbourhood they’ve made it abundantly clear on their debut single they “don’t want nobody to leave a bunch of flowers, or a teddy or a heartfelt poem wrapped up in a plastic sleeve”; which should please shopkeepers down Windsor Street.

The song is countrified – with such mournful pedal-steel it couldn’t be anything else – but lyrically and vocally it’s rooted firmly in the London suburbs; more Neasden than Nashville. There is though a touch of the Gram Parsons Burn-Me-In-The-Desert-and-Have-A-Beer spirit in how The Chilterns would like their passing marked. “Just throw my bones in the Grand Union,at the Treaty for a snakebite and black, two grams of cheap speed, a flaming Sambuca or a vodka, and hit it like you won’t come back”.

I’ll drink to that; only not too soon.

Roadside Memorials by The Chilterns in released today on iTunes, Amazon and that kinda stuff. Yours for a mere 79p.