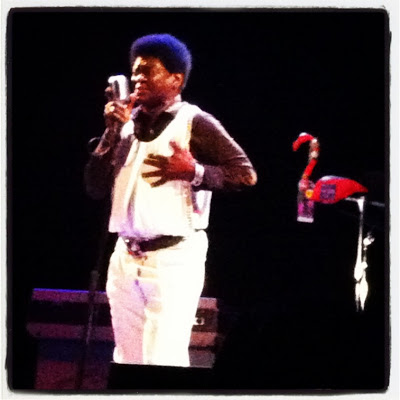 As Poull O’Brein’s fly-on-the-wall documentary, Charles Bradley: Soul of America, shows (and by the way, that was just dust in my eye, okay), Charles had to wait until he was 62 to release his first album, No Time For Dreaming, in 2011. He also suffered the murder of his brother, nearly died himself, lived hand-to-mouth in the tough housing projects of Brooklyn earning money as a James Brown impersonator, until hooking up with - and being gently nurtured by - Daptone Records who helped reveal his true self, previously hidden beneath the supportive crutch of a JB wig and cape. The film ends with his debut album being acclaimed as one the best 50 of the year by Rolling Stone magazine.

This heart-warming back story would only stretch so far if Bradley couldn’t take care of business. His second LP, the recent Victim of Love, is an improvement on the first – more assured, more natural, more cohesive - and to a sold out Assembly Hall he sho’ nuff TCB. Backed by an excellent young band (billed as The Extraordinaires but looked to me like the Menahan Street Band who played on his records) he delivered a performance with all the trappings of classic soul show.

The band hit a couple of instrumental warm-up numbers (including a funky version of the Lovin’ Spoonful’s “Summer In The City”) before Charles was given a ratchet-raising introduction: “Ladies and gentlemen…The Screaming Eagle of Soul… Miiiister… Chaaarles…  Braaaaaadley!” Out he strode in a white and glitter suit, black shirt, and straight into “Love Bug Blues”, one of the more overtly early-mid 70s James Brown work outs with a few moves thrown in straight from the Godfather’s manual.

Bradley has two main styles: the James Brown one used on “Confusion” and “Where Do We From Here” and a deeper, bluesier one (used more often) on “Through The Storm” and “How Long”. To his credit CB uses the JB moves sparingly. They are still there but he’s his own man and adopts them no more than his more illustrious predecessors in the soul and funk field who also copped plenty from Brown and Jackie Wilson.

There’s a couple of costume changes (nice take on Del Shannon’s “Runaway” in the meantime); some rather off-putting moments when he does a luurveman routine licking his finger and putting it to his sizzling bare belly; a far more impressive move where he flaps his arms gracefully like an eagle coming in to land; and during “You Put The Flame On It” he demonstrated so many dances and off-the-wall shapes in quick succession I thought I was watching David Brent auditioning for Berry Gordy.

No soul show would be complete without being asked “Do you want to go to church?” and the tear-jerking ballad “Crying In The Chapel” was immense. He hasn’t got a perfect voice (thankfully); it’s less whisper to a scream, more yell to a strain, but the roughness brings raw soul straight from his massive heart.
Posted by Monkey at 16:36