THE CANAL by LEE ROURKE 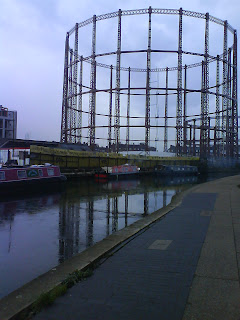 Lee Rourke’s unsettling debut novel is centered on a nameless man and a nameless woman sitting on a bench, gazing at the Regent’s Canal between Hackney and Islington, sometimes speaking, mostly not. That’s the surface but, much like the feet of the swans as they glide past, it kicks up a lot of turbulence underneath. The Canal is about boredom, about life, about love, death, dreams, fears, loneliness, solitude, truth, and thoughts you wouldn’t share in polite company. It’s also about towpath etiquette (ting-ting) and uses words like crepuscular but don’t let that put you off. I read it in two days, finished it over a week ago, and am still thinking about it now.

The photo above is one I took of that stretch of the canal by my flat about a year ago and somehow captures the mood better than I can in words.

The Canal by Lee Rourke is published by Melville House, priced £9.99.
Posted by Monkey at 16:47