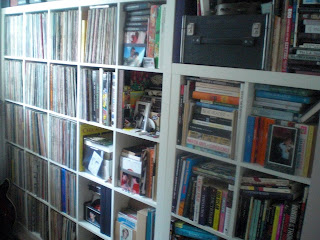 Some bits and bobs are going on eBay every few days (advanced search > by seller > markfayre) but it’s such a torturous teeth-pulling exercise it only scratches the surface. So, if you’re missing any volumes from Pebbles or Rubbles collections, if you’re looking for Seeds or Curtis Mayfield reissues, if you’re desperate for '80s James Brown compilations, Primal Scream promos, or you want my Beggar’s Banquet – let me know, otherwise the charity shops of London Town get ‘em.
Posted by Monkey at 16:40