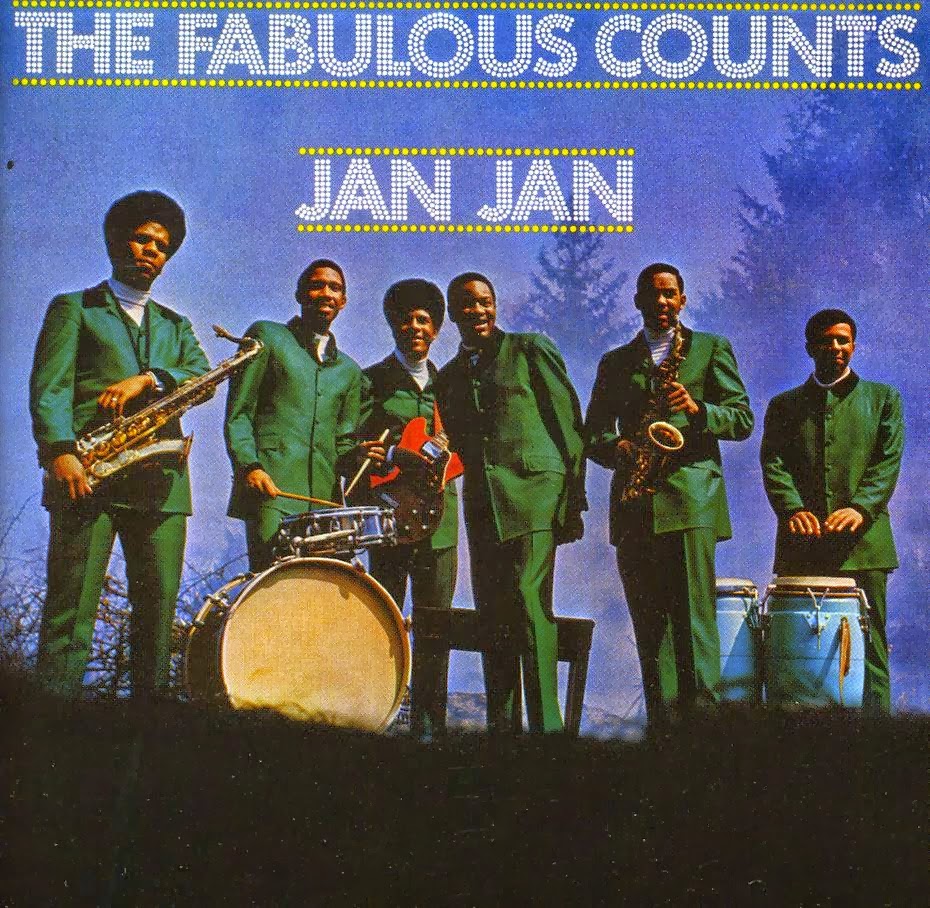 This month the walls of Monkey Mansions have shook to the sound of...

1.  Powder - "Turn Another Page" (1968)
Good to see Californian anglophiles Powder back in focus thanks to a new compilation on Big Beat, Ka-Pow! An Explosive Collection and their story told in detail in the new issue of Shindig! magazine. I'm not messin', these boys were superb. Part The Who, part Simon & Garfunkel, all parts immaculate pop music. If you don't know them, check 'em out pronto.

2.  Ike Turner & The Kings of Rhythm - "Ghetto Funk" (1969)
The part of the ghetto Ike acquired his funk was the smoother section if A Black Man's Soul is anything to go by. It's a mighty fine instrumental album - nominated (i.e. didn't win) a Grammy - and even if not as tough as titles "Getting Nasty", "Up Hard" and "Nuttin' Up" suggest, it moves in all the right places.

3.  Scott Walker - "It's Raining Today" (1969)
From Scott 3. Been reading No Regrets: Writings on Scott Walker in which different writers contribute pieces on the various periods of Walker's career. The chapter "A Dandy In Aspic" by Ian Penman, looking at the largely ignored Middle Scott MOR years (post Scott 4 to The Moviegoer in '72) is music writing at its most brilliant: imaginative, thought provoking, poetic. And means I've now got some gaps to fill.

5.  Reverend Charlie Jackson - "God's Got It" (1970)
Rev. Jackson plugs his guitar into a small portable amp and lays down an incessant beat for the congregation. If John Lee Hooker played churches...

6.  Fred Wesley & The JBs - "I'm Paying Taxes, What Am I Buyin'" (1974)
Fred & The JBs cut Damn Right I Am Somebody during the same session that produced James Brown's The Payback album and Mr Brown is never far away, ensuring he gets a cut of the writing credit no doubt. JB introduces the record by saying "To me, happiness is Fred Wesley playing his horn". Mr Wesley left Mr Brown's employment the following year.

7.  MFSB - "Freddie's Dead" (1973)
A clue to Freddie's death is helpfully provided on the front cover of the Mother Funkin' (cough) Sons of Bitches debut album: a gigantic syringe laying in an open coffin in a graveyard surrounded by red poppies. Subtle. Fantastic symphonic version of Curtis's classic.

8.  Squire - "You're The One" (1983)
Out of the bands spawned by the '79 Mod Revival, Squire were more 60s orientated than the majority. By 1983 and their swansong album Get Smart they had 60's pop nuggets down to a fine art (so much so that for years I thought their "Jesamine" was a cover). Difficult to select a highlight from the LP but "You're The One" meshes The Who's "So Sad About Us" to touches of the Byrds, the Beatles and the Hollies. That'll do.

9.  Superfood - "Superfood" (2014)
We've now reached such a distance from baggy and Britpop that bands now include members who weren't even born when Blur stumbled around on Top of The Pops with a chicken's head on a stick. Superfood's Don't Say That is an album that falls between the two periods and unashamedly pilfers from both and even throws in an echo of "Sympathy For The Devil" for good measure. I'm all in favour. Tonight I'm gonna party like it's 1991.

10.  Peter Doherty - "Flags of the Old Regime" (2015)
Wasn't Pete supposed to die ten years ago? He's still here but death still stalks our troubled troubadour. When I read this was a tribute to Amy Winehouse I had visions of Pete mumbling along to the Daptone horns, but no, this is a sensitive, moving and even graceful piece of work. Getting new stuff of out him is a bit like getting blood out of one of his collapsed veins but it's usually worth the wait.