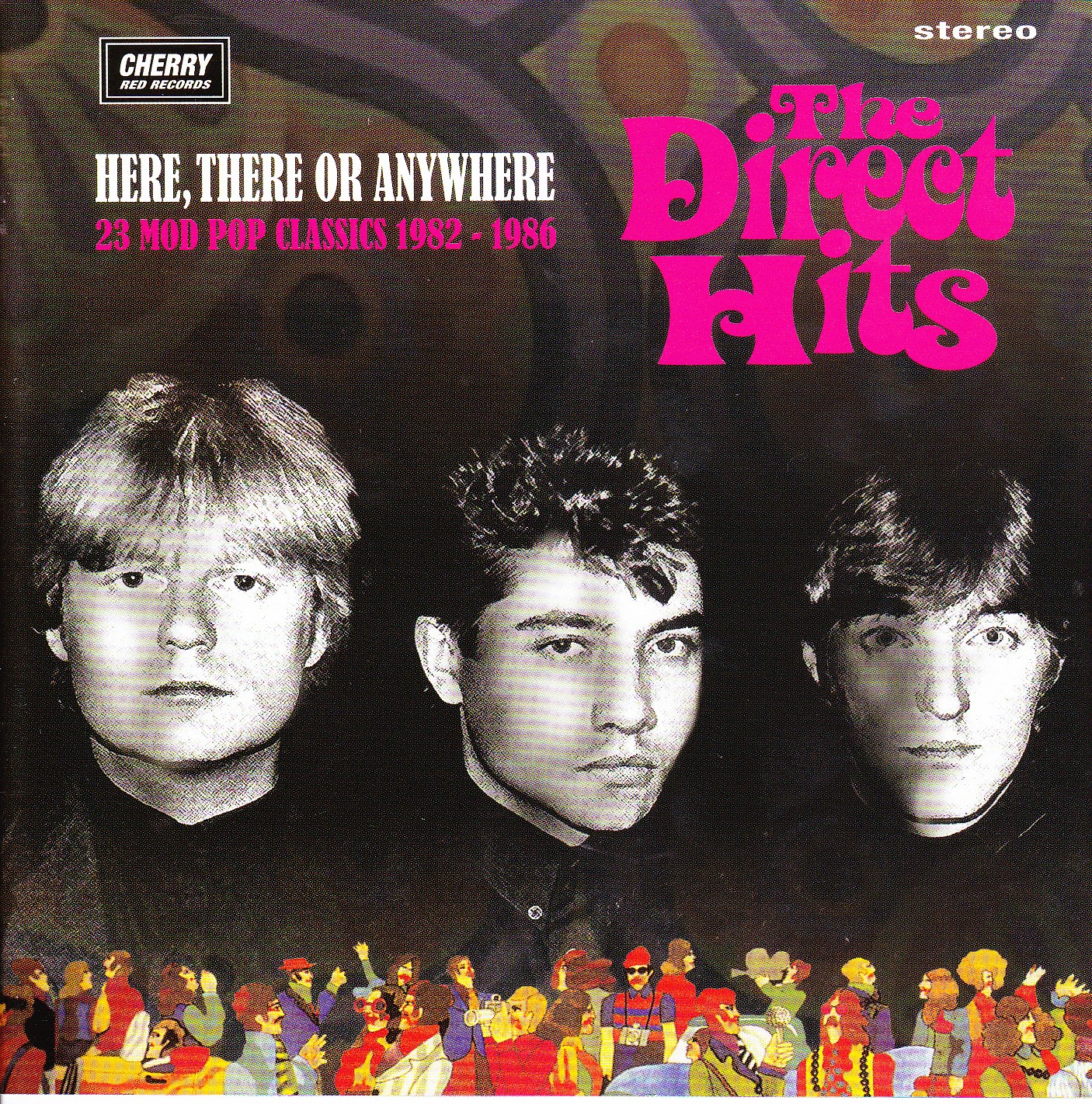 The Direct Hits appeared in the first half of the 80s as part of the next generation of mod related bands after the ’79 revival. Whether they were a “mod band” or not is a moot point but as this latest compilation, gathering 23 tracks from their five years attests, they had far more about them, and little in common with, the macho, sloganeering, Rickenbacker-bothering, punks-in-parkas often associated with the original revival period.

What makes the Direct Hits almost unique now is, when compared against their mid-80s peers, how good they still sound. I recently attempted to listen to bands from that period, including a few I liked at the time, and recoiled in horror at most of them. What separates the Direct Hits, and at their very heart, is the special song writing partnership of Colin Swan and Geno Buckmaster; above all else they lovingly crafted quality pop songs. It didn’t seem to be about being in a band or joining a scene, it was about writing and producing timeless songs. Comparisons were frequently and obviously drawn with Lennon and McCartney – think Rubber Soul and Revolver era – but in their story-telling South London compatriots Difford and Tilbrook also spring to mind. Swan and Buckmaster were fantastic at characterisation. Their songs unfolded like mini-dramas populated with people factual and fictional: Aleister Crowley, Marc Deans, Miranda Berkley, Henry The Unhappy Inventor, Christina, Modesty Blaise, Christopher Cooper.

My introduction to them came via the music paper Sounds during July ’84. A two-page spread entitled Mod ’84, gave the lowdown on this underground world of groups and fanzines loosely gathered under the mod umbrella. It had a profound effect on a fourteen year me, who’d already tied his flag to the mod mast but felt no association with any bands from ’79 (bar The Jam, if they count, and that’s a whole other conversation). To my young mind that era was ancient history (although I thought nothing of adopting the Small Faces and the Kinks). These two inky pages were filled with possibilities; they were for now, this was a new thing, this was ours. We had The Style Council and The Truth but everyone knew them, these were under the radar and therefore more exciting. I can’t recall what the article said about the Direct Hits but I soon splashed my pocket money going to see them, only the second band I’d ever seen live, at the Hammersmith Clarendon third on a bill behind Long Tall Shorty (who made no lasting impression) and Geno Washington (some bald old geezer in cowboy boots doing "In The Midnight Hour"). When next hanging out in Carnaby Street, I bought the recently-released album Blow Up from The Merc. 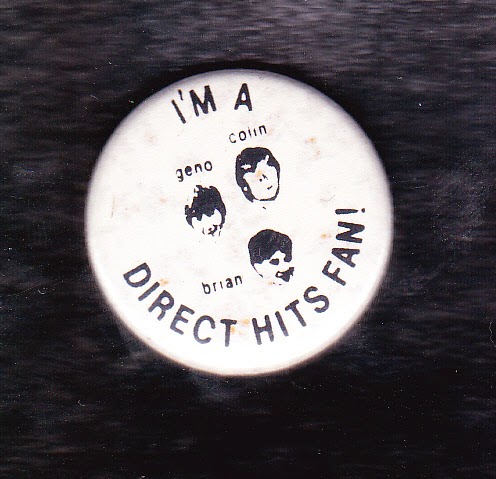 The Direct Hits were soon emblazoned in silver ink on my school pencil case next to The Scene, The Jetset, The Rage and others, but my enthusiasm for this new found universe was treated with suspicion by more cynical classmates who accused me of making up these bands to appear cool to the girls. Nonsense, I protested, I’ll bring in proof. Exhibit A was my I’m A Direct Hits Fan badge, which only attracted widespread ridicule due to the amateurish nature of said item. “You’ve made that yourself, you moron”. I’d done nothing of the sort but the Direct Hits did inhabit a homespun semi-fantasy world where they created their own cottage industry with a tape label to record their overflow of songs on other artists, and thanks to the incredible efforts of superfan Diane Kenwill appeared in their very own Direct Hits Monthly (modelled on the Beatles and Monkees magazines but with a budget that only stretched to a few felt-tips and the use of a photocopier) which ran for a miraculous 30 months straight.

Geno Buckmaster (I still don’t know if that’s his real name, it’s a cool one either way) may’ve owned the largest collection of Mellandi button-down shirts since Paul Weller, and the band may’ve forced drummer Brian Glover to invest in a boating blazer, but musically the Direct Hits were more 60s revivalists than mod ones, and had one foot gently placed in the neighbouring paisley park, allowing them access to both audiences, although it did mean they could be either too mod or not mod enough for some. Dan Treacy signed them to his Whaam! Records and they occupied a similar space to the Television Personalties and the Times - somewhere to the left of where the main action was.

Their recordings were cheap and cheerful, something that now adds to their charm. Little touches of backward guitar and fairground sounds cropped up here and there (“She’s Not Herself Today”, “I’ve Got Eyes”) ; occasional forays into Motown territory (“Miles Away”, “Just Like An Abacus”); tracks with a darker edge (“What Killed Aleister Crowley?”, “This Was Marc Deans”); the smattering of feedback on “Girl In The Picture” would’ve been as much as lesser bands could’ve managed in channelling The Who but not so the Direct Hits who audaciously – and successfully – created their own seven and a half minute A Quick One style mini-opera, “Henry The Unhappy Inventor”. This isn’t to say there aren’t any mod revivalist elements at work but think more of The Jam in their experimental and sensitive modes on All Mod Cons.

A previous Direct Hits compilation, The Magic Attic, was issued by Tangerine Records in 1994, so for a band that only made released two albums and a couple of singles (“Modesty Blaise” and “She Really Didn’t Care”) there is naturally a lot of overlap on this new CD. But Here, There Or Anywhere is an overdue reminder of the band and although it unfathomably omits “Ever Ready Plaything” long-time fans are rewarded a smattering of unreleased demos and live tracks (the knockabout “Theme From The Munsters” is at odds with much of the rest).

The band’s second album, House Of Secrets, was released in 1986 by which time the mod scene, in such rude health two years earlier, was disintegrating and the band, now without much of an audience, folded shortly afterwards. Much is made of the band’s mod connections in the CD packaging and I’m sure Cherry Red knows how to market their product far better than I but if, like me, you usually cringe and steer well clear of such things then be careful not to miss out due to tight pigeonholing. I was sniffy about the mod revival as a teenager and now I’m positively allergic to it; it brings me out in a nasty rash, but Here, There Or Anywhere is an engaging and enduring collection of charming 60s style pop, gentle psychedelia and quaint independent English pop music with modish leanings, and that's something always worth reviving.

Here, There Or Anywhere by The Direct Hits is released by Cherry Red Records, out now.
Posted by Monkey at 10:30