BARRENCE WHITFIELD & THE SAVAGES and KING SALAMI & THE CUMBERLAND THREE at the BORDERLINE, LONDON 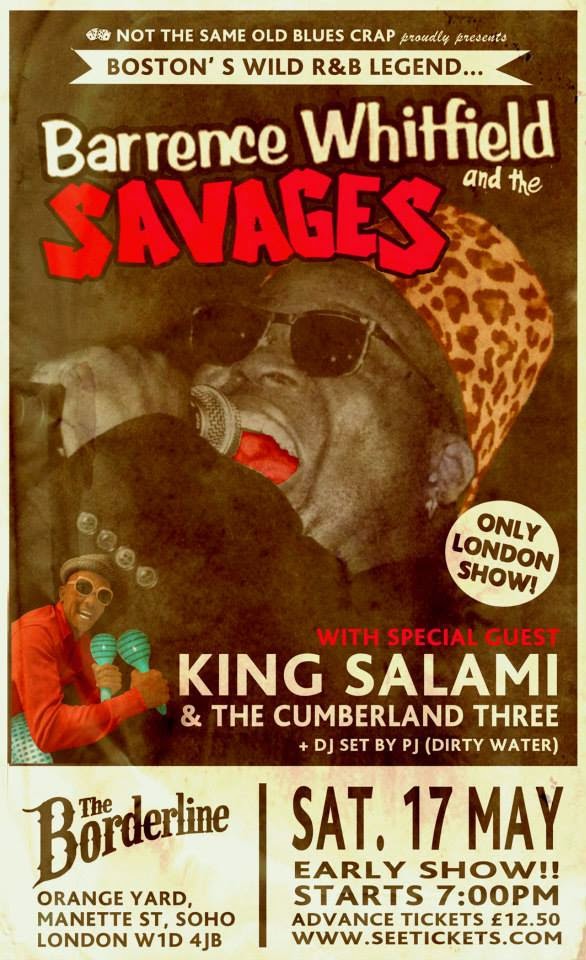 Seconds out, round one. King Salami and the Cumberland Three were in exhilarating form at the Borderline on Saturday. One quarter Caribbean, Spanish, French and Japanese they launched a smash and grab raid of blistering, larger than life, greasy rockabilly and roll that fried and crackled the eyes and ears. King Salami shook the Diddley out of his maracas, twisted his elasticated body into unlikely shapes, and stared with crazy bug-eyes at the audience. On an unusually hot night in the capital he asked, “It was meant to be minus 10 degrees today but it’s plus 23. Is that because of the weatherman or because of rock ‘n’ rooooooll?”

The Cumberland Three were packed tight and pinged and ricocheted around the stage and demanded “Less Bone… More Meat” and put on feather headdresses for the Zulu stomp of “Big Chief”. They ripped up a version of “Troubles” by The Rollers and shook up something about a pineapple. Their show was one of exaggerated Frat Shackish cartoon entertainment - brilliant fun -but they’ve got the licks to back it up too, notably from the fabulous Telecaster and Vox AC30 combo cooked by guitarist T.Bone Sanchez; which owed as much to Wilko Johnson as Link Wray. They’ve released a string of sausage flavoured cuts since 2006 (new EP “Howlin’ For My Woman” is out soon) but the best way to taste King Salami & The Cumberland Three is in the flesh. When Salami asked the crowd to kneel before The King, they obediently complied. He, and they, was irresistible.

It was going to take a mighty effort to follow that display and Bostonian Barrence Whitfield was up for the challenge, laying down an opening jab with “Ramblin’ Rose”. “The Corner Man” and “Willie Meehan” were both boxing related blasts of in-the-red rockin’ R&B and whilst King Salami had speed and agility, Barrence used brute force and staying power, his punches given extra oomph from the Savages’ fat, round sound led by a honking sax. With thirty years since their debut album these gentlemen knew how to work the ropes and the longer they played the stronger they got. “Ship Sailed At Six”, “Blackjack” and “Bloody Mary” were all were powerhouse numbers rasped and barked Rufus Thomas-style by Barrence, who repeatedly wrung the sweat from his drenched shirt, until finally unbuttoning it to display his full fighting weight.

To mix it up, there were a couple of slower, more straight-soul covers. Lee Moses’ “I’m Sad About It” from the recent Dig Thy Savage Soul album and Johnny Sayles’ “You Told A Lie” saw Barrence take a leaf out of James Brown’s manual, dropping to his knees, sobbing (not entirely convincingly), only for his band to come to his aid and pat him on the back, encouraging him to his feet. Breath caught, it was back on the counter attack once more. Unlike the majority of the set, firmly rooted in the late 50’s/early 60s, “Oscar Levant” sounded like a New York Dolls take on that era and almost landed the knockout blow.


Two encores, the second started by bassist Phil Lenker, showed neither the squashed to capacity Borderline crowd nor band wanted this last date of their UK tour to end. Full credit to the promoter Not The Same Old Blues Crap for putting on such a tremendous double-bill. This judge’s decision? A tie.
Posted by Monkey at 21:23