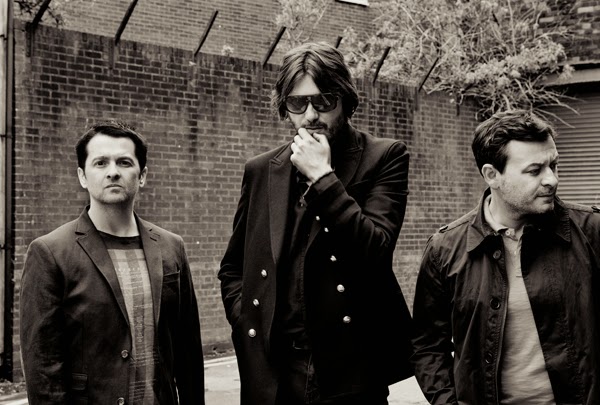 I should be used to seeing the Manic Street Preachers without Richey Edwards by now. It’s been twenty years since I last saw him throwing rock ‘n’ roll shapes on the left hand side of the stage. Guitar slung low, nonchalantly hitting a few chords, looking beautiful. Even before his disappearance in 1995 the Manics played shows without him when his fragile mental state required professional attention. In a frank interview with Gary Crowley prior to their Reading ’94 appearance about Richey’s condition, James Dean Bradfield described how they’d resemble “a shitty mod trio” without him.

Every Manics gig still brings thoughts of Richey, from his unoccupied space on the stage, to the songs he left behind, to the lyrics Nicky Wire has written since which so frequently bring his absence to mind, whether intentional or otherwise.

Half an hour into the final date on their latest tour - a second night at Brixton Academy - the Manics play “Rewind The Film”, which reflects on a life nearing completion (“So rewind the film again, I’d love to see my joy, my friends”) whilst a film projects behind them of people in their later years pottering about playing bingo, the camera honing in on their wrinkled faces. It’s very poignant and hard not to think not only of Richey but friends and family no longer with us.

With those images fresh, they followed with an unexpected rendition on “Die In The Summertime”, one of three tracks to be played, none singles, from the most bleakest, brilliant record imaginable, their masterpiece, and Richey’s parting shot, The Holy Bible. The narrative being played out in my mind, at least, continued with a rousing and emotive “Everything Must Go” as Bradfield bellowed “Nothing but memories, MEMORIES!”

All this makes it sound a somber and depressing affair but it was anything but. They put on a show; it’s an intelligent, thought-provoking show but a show nonetheless. James Dean Bradfield from the opener “If You Tolerate This Then Your Children Will Be Next” wanted to see those clapping hands in the air and did. As much as I treasure those early gigs in front of a handful of hostile people bouncing cans and bottles off Bradfield’s bonce it was never the Manics’ intention to be a credible but unsellable product so any slight rockisms are par for the course I guess.

During the first half Nicky Wire looked absolutely fabulous in his black jeans, black leather jacket, dark punky air and panda eyes – like Sid Vicious’ wealthy, clean-living uncle – and jumped and leaped and bounced like he’d finally been given the new bionic knees he’s so long craved. Second half he returned dressed as a camp milkman.  Wire’s favourite part of the evening, he told us, is thousands of people yelling “fuck off” at him mid-song. During “Stay Beautiful” his smile couldn’t have been wider.

I’ve never much been a fan of Bradfield’s acoustic interlude – my clearest memory of those final Richey gigs at the Astoria isn’t of nosebleeds and destruction but of me sulking off to have a piss during “Bright Eyes” – but his handling of “This Is Yesterday” and “This Sullen Welsh Heart” was truly exceptional music from and for the soul.

With their twelfth album, Futurology, imminent – only six months since the last one - there’s a wealth of material to draw from and although they continue to rate “Tsunami” and “You Stole The Sun From My Heart” far higher than I, it was a superb set list choice. The big hitters “Design For Life”, “You Love Us” (“We love you”, sings Bradfield back at the crowd), “Motorcycle Emptiness”, “The Masses Against The Classes” (seems incredible now to think the general public made that the first number one single of the new millennium), “Your Love Alone Is Not Enough” were present and although “Faster” was absent, a spectacular, lesser-spotted “Archives Of Pain” was more than enough consolation with around ten songs not released as singles. As for “Motown Junk”, I could listen to that on repeat all night and the thrill would never diminish.

Throughout the past 23 years I’ve never seen a bad Manics gig, I’ve always enjoyed them, but on occasions they’ve maybe treaded water. Not now. Following the post- National Treasures hiatus there’s real fire in their bellies and in the three spiky new songs – “Europa Geht Durch Mich” (yes, parts were in German), “Futurology” and “Let’s Go To War” – showcased on Saturday.

There's nothing shitty, mod or even trio about the Manic Street Preachers (a couple of other musicians discreetly do their thing), just a remarkable band. As much as they, and I, reflect on the past, it's the present and future which still excites.
Posted by Monkey at 19:51