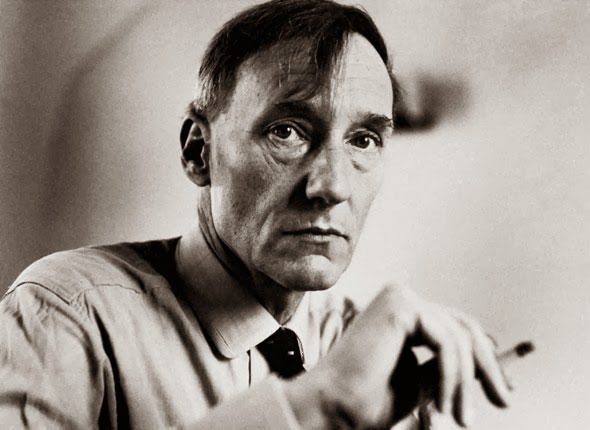 “ROCK AND ROLL ADOLESCENTS STORM INTO THE STREETS OF ALL NATIONS. THEY RUSH INTO THE LOUVRE AND THROW ACID IN THE MONA LISA’S FACE. THEY OPEN ZOOS, INSANE ASYLUMS, PRISONS, BURST WATER MAINS WITH AIR HAMMERS, CHOP THE FLOOR OUT OF PASSENGER PLANE LAVATORIES, SHOOT OUT LIGHTHOUSES, TURN SEWERS INTO THE WATER SUPPLY, ADMINISTER INJECTIONS WITH BICYCLE PUMPS, THEY SHIT ON THE FLOOR OF THE UNITED NATIONS AND WIPE THEIR ASS WITH TREATIES, PACTS, ALLIANCES.”
William Burroughs

The above extract from Naked Lunch was printed – like that, in capital letters – on the back of Manic Street Preachers single “Motown Junk”. When I bought that record, one snowy Saturday afternoon in January 1991, I knew who William Burroughs but hadn't read him. Those lines perfectly complimented the exhilarating speed rush of this new Welsh punk band I was hearing for the first time. It turned out to be momentous afternoon; I've still not bought a better record and have yet to discover anybody comparable to William Seward Burroughs.

Before the next Manics release I’d ploughed through Burroughs’ Junky, Queer and Naked Lunch. The first two were straight narratives, easy to follow and opened the lid into worlds I was not familiar. The third, well, what the flaming hell was that all about? If there was a “story” I couldn't fathom it – I shouldn't have bothered looking - but individual passages were unlike anything I’d read before. When Richey Edwards later said "Books were just as exciting to us as records," it was clear what he had in mind.

I found the Manics quote. It was longer than their cut-up version on their sleeve and included a passage about candiru – an eel-like fish – which would “dart up your prick or your asshole or a woman’s cunt” and hold itself there with sharp spines. If candiru were frightening, they were nothing compared to what a mugwump could do to you sat in your local bar. What was based on fact and what was from Burroughs’ disturbed imagination (Jack Kerouac had nightmares after typing Bill’s manuscript pages) was difficult to ascertain but this was incredible stuff. Likewise, it was difficult to tell what was past, present or future. Sections like Hassan’s Rumpus Room, where murderous sex games were played out, were genuinely shocking – I couldn't believe Burroughs got away with this in the 1950s – but other parts were just plain funny. Having a quick flick through it again today that mixture of shock and comedy hasn't diminished. Who else would instigate a scene set in Cunt Lick, Texas?

The more of his books I read the less I seemed to understand – his cut-up books I still struggle with – but as a man he soon became, and firmly remains, a source of endless fascination. At my imaginary dinner party he'd be sat at the top of the table with Keith Richards to his right. We'd pass on the food. There are so many eyeball kicks to be had in his work. Some I “get”, some I haven’t a Scooby what he’s on about but I like the mix of his subversive nature and desert-dry humour. Bill may have been deadly serious about time travel and telepathy and the Ugly Spirit but I can’t help think he was putting us on much of the time; his pursed lips and involuntary twitch giving him away. As Darran Anderson wrote in his excellent piece for The Quietus the other week: “William S. Burroughs was a high modernist and a writer of complete trash; the two are by no means mutually exclusive. He was a genius and a bullshit artist.”

This year marks the William S. Burroughs Centenary (born 5th February 1914 in St. Louis) with events taking place around the world to mark the occasion, co-ordinated by the official Burroughs 100 website. London is well represented with two exhibitions currently showing.

The first is Taking Shots: The Photography of William S. Burroughs at the Photographers’ Gallery, Ramillies Street, W1 with its title neatly alluding to Bill’s preoccupation with photography, junk and firearms. Photography being the least well known and this is the first exhibition to focus on a previously overlooked area. Burroughs took thousands of photographs but they were a means to an end. He used them to inform his writing, creating characters out of his shots or capturing people and scenes he believed he’d already written about. Time, for Burroughs, didn't run in a chronological order the way it does to you and me, and he’d systematically attempt to jump and cut between time frames. He’d also use his photos for collages, including taking photos of photos and repeating the process until the images were indistinguishable.

For Burroughs, “The collage is like flower arranging,” a subject his mother, Laura Lee Burroughs, knew well and published volumes of books on the subject. Her prim guide “Flower Arranging – A Fascinating Hobby” gives advice on how to keep a modern home stocked with ice-cold Coca-Cola, is displayed feet away from a series of photographs showing Bill’s bed before and after sex. Quite what ma would have made of her son displaying his jizz-stained bed sheets to all and sundry I can’t imagine.

Burroughs' main theme was control and how to fight against agents of control and authority, whoever or whatever they were, and he’d use photography and tape recordings in his arsenal to, according to biographer Barry Miles, "disrupt the space-time continuum and cause change." When in 1972 “the horrible old proprietor, his frizzy-haired wife and slack-jawed son” of London’s first ever espresso bar, the Moka Bar off Shaftsbury Avenue, upset Bill with “outrageous and unprovoked discourtesy and poisonous cheesecake” he would return every few days to record the place and play back the recordings and take more and more photographs.  Two months later the coffee bar closed down and a satisfied Burroughs rubbed his hands with a job well done. 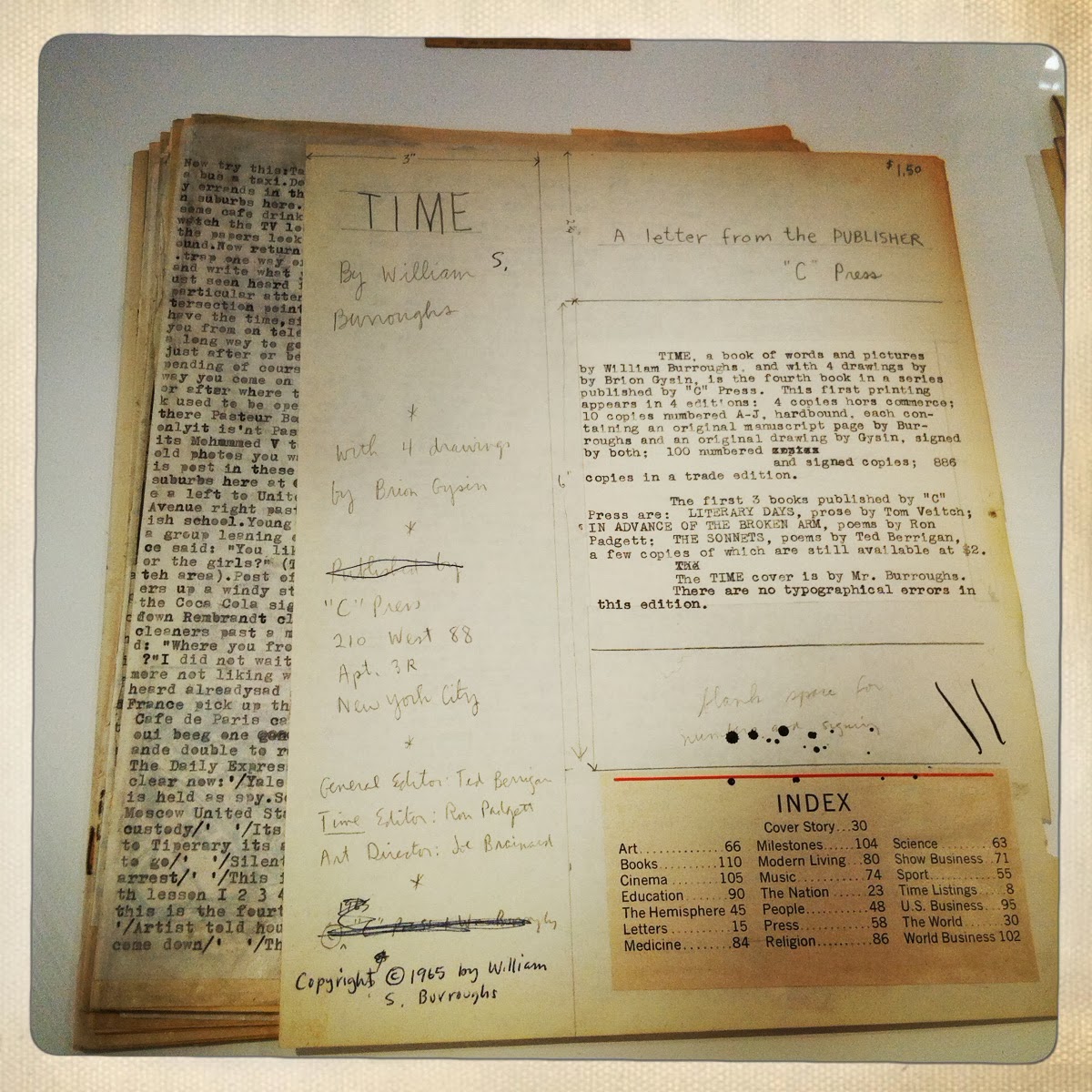 Taking Shots is filled with fascinating artefacts - although a Burroughs novice would struggle to see the relevance of snaps of radio towers, desolate St. Louis streets or unnamed young men hanging around Piccadilly – which reveal more of the man who knew no boundaries. Writer, painter, sculptor, explorer, exterminator, film maker, drug taker, collaborator, photographer, the list goes on: piecing together Burroughs’ life is like assembling a jigsaw with no edges.

One of my favourite Burroughs notions is that words are a virus that get inside us and take over. He’d challenge people to see how long they could go without thinking in words. Try it. Can you fight the words for more than a couple of seconds? With that in mind it was little wonder he’d turn his hand, especially in later life, to non-verbal forms of communication.

Around the corner from the Photographers’ Gallery is the aptly named Riflemaker gallery at 79 Beak Street, W1 and a small selection of Burroughs’ gunshot wooden sculptures, stencil paintings, target practice drawings, photography and illustrations. Burroughs might have been a paranoid, cold-hearted, wife-killing, misanthropist, dope fiend but he loved his cats. His slim book The Cat Inside is so out of character it'd make a lovely present for any Grandmother or cat doting spinster. In one painting at the Riflemaker a sequence of thick black vibrating squiggles becomes lip-quiveringly sad when in the bottom right corner his shaky hand writing reads “The cat who came here to die”.

William S. Burroughs, rather miraculously, didn't die until 1997; he was 83 years old.