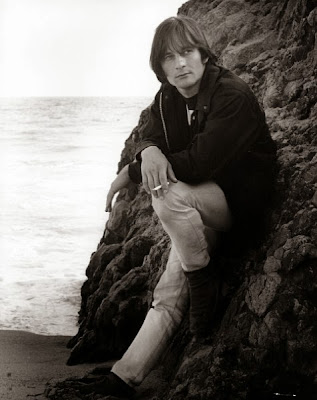 Gene Clark did go it alone but it was his refusal to fly which contributed to his departure from The Byrds, less than a year after “Mr Tambourine Man” catapulted the band to number 1 on the singles chart and had them heralded as America’s Beatles.

Jack and Paul Kendall’s new film The Byrd Who Flew Alone doesn’t make it entirely clear whether Clark walked completely voluntary or was pushed but when a panic stricken Gene suddenly got off a plane about to fly to New York his band colleagues weren’t in any hurry to offer much sympathy or persuade him to stay. David Crosby admits it would’ve been impossible to find five more completely different human beings, and when Clark – as their lead singer and main songwriter – was allegedly presented with a cheque for $47,000 and bought a Porsche whilst the others received $4,000 and caught buses it did nothing to bring the band closer together.

Forever grounded, Clark would never achieve those heights again despite a host of figures – including a very likeable David Crosby - now cueing up to declare him and prolific songwriter and genius. “He sang from his heart and he had great songs. Why didn’t it work? That’s the question,” says Chris Hillman. Using archive footage (some never seen before) and new interviews with the three original surviving Byrds, family, friends, record company owners and musicians, the Kendall’s attempt to find out.

His final manager, Saul Davis, states Gene should be regarded and remembered as at least the equal to Gram Parsons and the Father of Americana. Parsons though had the misfortune/good business sense to die at arguably his musical peak and leave a tidy back catalogue whereas Clark soldiered on through a fragmented career of folk, rock and roll and country, never quite able to find a neat fit in the music industry nor cope with the pressures (and pleasures) brought by fame. Carla Olson feels Gene was ahead of his time but Sid Griffin repeatedly claims Gene kept missing the ship leaving the harbour, in particular in the early 70s - the age of the singer/songwriter - a period which was should’ve been tailor made to suit Clark’s sensitive talent and ethereal qualities.

Two Gene Clark’s emerge. The first is the relaxed poet, living a quiet family life in the woods near Mendocino, and the second is the boozy nightmare stomping around LA forever burning bridges. Not suited to taking any kind of drug, he took most of them: from booze and joints in the Byrds; to Martinis and LSD with Doug Dillard; cocaine; and eventually heroin. Whenever success came (or rather when the big money came like it did when Tom Petty covered “I’ll Feel A Whole Lot Better”) it would bring out the worst in him.

We hear A&M Records released him as he wasn’t prepared to do much promotion for his stunning second solo LP White Light (1971) yet blamed Asylum boss David Geffen for not doing enough to get behind what is now considered by many his masterpiece – 1974’s No Other – launching himself across a restaurant table to grab him Geffen around the throat. Punching the lights out of one of the most powerful men in Hollywood wasn't the wisest career move.

From there on his career remained mostly in the shadows unless reunited with whichever former Byrd was doing the rounds but he kept plugging away through the hard times – including the removal of much of his stomach - until his death in 1991 from a bleeding ulcer, aged 46. The film does a fine job in giving equal measure to all aspects of his career and ends with a captivating and poignant home-video performance of “I Shall Be Released”. I was already a fan but The Byrd Who Flew Alone has reignited my admiration for Gene Clark and is a worthy tribute to the man and his music.

The Byrd Who Flew Alone: The Triumphs and Tragedy of Gene Clark is released via Four Sun Productions on 1st November 2013.
Posted by Monkey at 18:36