THE LUCID DREAM at the BUFFALO BAR, ISLINGTON 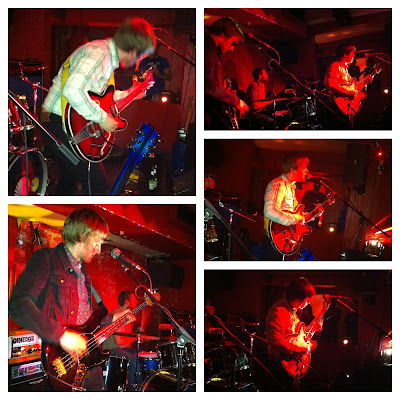 The Lucid Dream’s psychedelic maelstrom made my ears bled in Technicolor last week at the Buffalo Bar.

Promoting their debut album, Songs of Lies and Deceit, this four piece from Carlisle knuckled down, turned up, and turned on the gathered throng with a relentless blast of heavy, pedal-happy, psych rock full of reverb, fuzz and droning effects.

There was little of the early Mary Chain flavour of second single “Heartbreak Girl” (which wasn’t played) and one lengthy song tended to merge into the next making individual numbers indistinguishable on first hearing but the overall effect was hypnotising, and that they played songs from a second album suggested they aren’t slouches in the song writing department.

If I’ve one criticism of their three singles so far it’s the vocals are the weakest part (pitched too high for my taste) but live that’s not noticeable as they’re swallowed up in the music and their druggy lyrics are perfunctory anyway.

The album sounds promising and should allow more of the nuances to come through but however it turns out The Lucid Dream live is an experience in itself. Keep your eyes and ears open.

Songs of Lies and Deceit by The Lucid Dream is released on CD by Holy Are You Recordings on 5th August 2013. The 500 vinyl copies have already sold out.
Posted by Monkey at 18:24

Labels: buffalo bar, holy are you, live reviews, songs of lies and deceit, the lucid dream