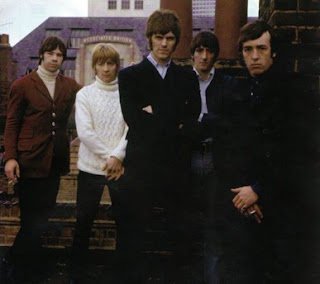 Interest on Modculture about The Action has prompted me to start making available on-line the various fanzine interviews in did with them in the mid-90s. I’ll show them in the order they occurred (Reggie King and Mick Evans to follow).

This first one with original lead guitarist, Pete Watson (on the right in the picture), took place in 1993 and appeared in my Something Has Hit Me and also in Bill Luther’s Smashed Blocked. Myself, Pete and Darren Brooker and Richard Merrett from local pop combo The Wilsons were huddled together in Pete’s room not far from Heathrow.

How did you meet the rest of the band?
It all started in Kentish Town. My Mum and Dad had a pub there and that’s where the rest of the band also lived. I used to demonstrate guitar at Sound City in Shaftsbury Avenue on Saturday mornings and they came in to see me. They were already together the four of them, and called The Boys, but they needed a lead guitarist so asked if I wanted to join them. We did a few gigs at the start but weren’t any good so we took a year off. Just practiced and practiced. Originally we started the gigs in ’62 and then started again to do more and more around the end of ’63.

There was that Sandra Barry and The Boys single, were you on that?
Yeah. Sandra Barry, whatever happened to her? “Really Gonna Shake” it was called. We wrote that. Reg King wrote it and we all helped arrange it.

Why did you then change the name to The Acton after The Boys solo single “It Ain’t Fair”?
The Boys wasn’t really the sort of name to put to the music we were playing. The sounded too clean-cut.

The Action had a very strong mod image; was that a deliberate ploy or was it something you were really into?
Oh yeah, we were all really into that. Tamla Motown, soul music. That’s all we were into. We didn’t play any pop chart numbers at all, just soul numbers.

Did you collect soul records?
We used to go down Saville Row where there were these studios that Kenny Lynch worked in. We used to go and raid their library of all the American soul songs. We used to sort through them and pick the ones we liked, then put our own arrangements to.

What ones were you doing in your live set?
Well, “Land of a Thousand Dances”, we were doing that right from the off. That song was really a part of us wherever we went. We used to finish with that one. It used to last about twenty minutes!

What were the gigs like?
Great. We did the university circuit which was good. Before that we did the Goldhawk, as well as the Marquee on every Tuesday night. We took over The Who’s Tuesday night slot. We were their backing group for a time, until we got the sack. Their manager Kit Lambert sacked us for taking too much of the limelight away from The Who. But not long after that they got their record going and left the Marquee, so we stepped in. We used to go back to Keith Moon’s flat in Shepherd’s Bush after playing the Marquee. He was a nutcase, good parties though. And Roger Daltrey still owes me a fiver. Imagine the interest on that now.

What other bands did you play with?
Most of them really. The Small Faces. Rod Stewart used to be in our backing band. Loads of gigs we did with him. Especially up north. Any gig up there and he always seemed to tag along. He was pretty much the same then as he is now. Always said he had no money. We did a Beatles Spectacular show as we had the same recording manager, George Martin.

How did you meet George Martin?
We kept phoning him up. We just wouldn’t leave him alone. In the end he came with his secretary to see us at a gig in this dancehall above a pub in Putney. He listened but said he couldn’t really tell much from that and he would know better once he got us into the studio.

What was he like to work with?
He was great. Lovely fella. You weren’t nervous about going into the studio with him. You’d play the song a couple of time and he’d just say “change that bit” or “try and do it like this”. Then he’d come ins and play the piano as well. Quite a few of those records had him on piano, things like “Since I Lost My Baby”. When The Beatles were recording George used to ring us up and ask if we wanted to come down. So we’d pop down there, have a cup of tea or coffee with them. We’d play cards with Ringo while the others were putting their vocals on. They were a good crowd. The only funny one was John, he was a bit off. You’d never know how to take him; he’d just take the piss basically. The rest of them were great.

Did George Martin alter the sound a lot in the studio or was it pretty much played live?
It was pretty much live, the vocals were double-tracked or whatever. He altered it a bit. Everyone said we were better on stage than on our records. People would say we were twice as good on stage. I don’t know what he did but here’s not enough bass for me. Not enough depth.

Were any of the concerts recorded?
Yeah, there was down at the Marquee. I don’t know whatever happened to it, whether it was for radio or television or what. There were cine cameras there as well. We did these things but I never knew what they were for.

Tell us about the album that was recorded. Why didn’t it come out?
We did an album in ‘66/’67 for EMI, and a lot of it was our own songs. “The Place” from the compilation album was going to be on it. We just cut a load of songs and were going to piece it all together after that. I think it was not long after that that we sort of broke up, we didn’t even get as far as giving it a name.

Who picked the covers that got recorded? George Martin?
No, we’d choose them ourselves. George would then listen to it and tell us if he thought it was any good or not. Usually we’d do something and he’d say “that’s not going to be a number one!” t really bucked us up. They were really good days. It’s a pity we didn’t write as well as we played other people’s songs. Really it was only Reg and the bass player Mike who could write songs. I started to try and write but it always seemed too difficult for me. I’d sooner let them get on with it.

Why do you think the records never quite made it chart-wise?
I think mainly because we were playing great gigs all over the country and the public expected us to bring out something “different”, something totally unexpected. If we had recorded something unusual of our own rather than cover versions we might have done a lot better. That’s what we were getting towards near the end. We always tried to be different; we didn’t want to be like anyone else. The Who were playing the same songs but in a more outrageous way, we just did them differently. Also, with the right manager things might have been different.

Why? What did he do?
He just ripped us off. He was the bloke that did that Bob Dylan concert at the Isle of Wight. Took the advance ticket sales and buggered off with it. That’s the sort of bloke he was but we didn’t know it at the time. He ripped us off badly with the money. We only found out after he said he didn’t want to manage us any more, then we discovered all the debts. Every time we went up north it wasn’t just for one night, it was four or five, and we were staying in hotels, we had our own road managers who’d do everything for us. But none of the bills were ever paid. They had writs out against us all over the place. That’s why I left. The others carried on for a while. For about eight months they worked for nothing, just paying back debts. I didn’t want to go through it all again. I was so sick of what he had done to us, and us breaking up. I mean, we were nearly there, we were. We knew all the right people, we knew everyone, we had George Martin, what more could you want? But when that bastard did that to us I just washed my hands of it all. I went back to my Mum and Dad’s pub; just shut myself off from everyone. Watched all the others over the years getting richer and richer while I was getting poorer and poorer. At least I’m not dead though like Moonie. I knew he’d kill himself. He was always into drugs and stuff in excess.

Did any of you lot take anything?
The only time I ever took stuff was in the early days when I drove the van. I took speed to keep awake driving all night. It used to keep me awake and keep me talking. Bleedin’ jaws used to ache! No matter what people were discussing, no matter what subject, you knew about it. You could talk them under the table. Didn’t know what the hell you were saying though. I never went on to the heavier stuff like LSD or anything. Reg did. He fell off the stage one night and we had to pack up and go home.

Going back to The Ultimate Action, what’s your favourite song from it?
Apart from “Land of a Thousand Dances” which is sentimental because it was the first thing we did in the studio with George Martin, my favourite has to be “Since I Lost My Baby”. Everyone used to like that one, it’s always been my favourite. “The Place” is one we wrote for the album because there was this club called The Place that we used to do regular. To me “Hey-Sha-Lo-Ney” is a lot of bleedin’ rubbish. We only did it for a b-side because we didn’t have anything else. A lot of people seem to like it though.

That’s a beautiful Rickenbacker in the corner of the room.
That’s the original guitar on all The Action records. 1962 I bought it. Thirty one years old and I’ve never had to touch it; never had the neck straightened, nothing. It’s a twelve-string but I only use it as a six- string now, just to mess about with. Van Halen wanted it for studio work. Offered me £800 and a brand new Fender on top but I turned it down. It has got too much sentimental value.

Have you kept in touch with any of the band?
I’ve not seen the boys from that day to this. None of them. One of them joined Ace, who were one-hit wonders. Roger the drummer married an American, I don’t know if he went to America or not. Mick went funny, wears one of those funny hats and goes around praying all day. Reg went into record production for a while. I’d love to see them all again. I’ve not seen them for twenty-five years. Maybe I should get Cilla [Black on Surprise, Surprise] to arrange it.
Posted by Monkey at 13:36