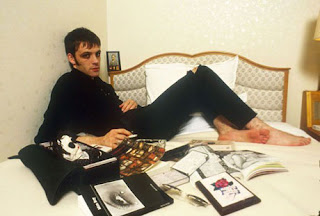 “Most of my heroes don’t appear on no stamps.” Someone (Chuck D) said it, the Manic Street Preachers quoted it, and I pinched it. It’s a recurring theme.

I wouldn’t say I’ve any heroes as such but I wouldn’t deny The Jam, and Paul Weller in particular, musically and sartorially shaped my early teenage years and a decade later the Manic Street Preachers, and Richey Edwards in particular, had an equally profound and lasting effect ideologically and culturally.

The streets were covered with snow in January 1991 when I bought, unheard, the Heavenly 12 inch of “Motown Junk”. Time hasn’t diminished the thrill and rush of that garbled punk urgency which flew acid in the face of everything around it, then and now. It’s difficult for newcomers now with the Manics far removed from the mess of eyeliner and spray paint that first dazzled from the pages of the NME spouting off about William Burroughs, Karl Marx and Harold Pinter to believe how vital and exhilarating they were in an flimsy era of post-baggy "we've always had a dance element to our music" desperation and faceless shoegazing dullness. The Manics were a fascinating, intelligent, well read, educated, cynical, unfashionable, working class band kicking against the pricks, yet slowly – and frustratingly – unraveled as often willfully subservient and compromising.

Ben Myers’ Richard tells two stories in parallel. The first recounts the story of four insular school friends from a Welsh mining town that became the Manic Street Preachers who invited and provoked hostility and adoration in equal measures. Edwards, with little to no musical ability being enlisted because he was their best friend, driver, looked fantastic, balanced the symmetry, could write lyrics and be their Minister of Information a la Public Enemy’s Professor Griff. It proved a smart move but one that came at a price. There’s little in Myers’ imagining to cause too much indignation from Richey acolytes, as it effectively blends established “fact” with Richey’s well documented sense of worthlessness. After only selling a handful of their first homemade single Richey was already saying “There is more self hate in this band than anyone can realise. We hate ourselves totally”. Yeah, yeah, nice quote mate, makes good copy for the music press, play the game. Prove it they said.

The second, potentially more difficult to accept book, is the one told in Richey’s voice from the time he disappeared from the Embassy Hotel in 1995 never to be seen again. Myers uses the few alleged sightings as stepping stones to construct a version of events and a version of what could have been going through his mind. How would he know? Well, he doesn’t, does he? The book jacket pointedly says Richard - A Novel, not Richey Edwards - The Unauthorised Biography. It paints a distressed Richard driving on autopilot back to Wales, trampling the hillside, seeking solitude and release from the taunting voices in his head telling him what an insignificant, useless coward he is. Kurt Cobain, he proved it. He was 4 Real.

Myers was always going to court controversy with this (“how very dare he?”) and the technique has been done better before (David Peace’s The Damned United) but I managed to easily separate fact from fiction. Richey fans should be an intelligent bunch but that didn’t stop the clatter of protest before publication. If somebody had done the same to a personal friend of mine my instinct would be to want their severed hand on a stick but I didn’t know Richey; I only canonized my own interpretation of him. The interpretation based on his interviews and lyrics so I struggled through the first third of this book as I couldn’t hear Richey’s voice. The words attributed to him are at times simple and clichéd, as is some of the text, and not as eloquent and as carefully measured as I’d expect. But that slowly sinks away and the comparisons drift apart. I stopped reading it as an account dictated via Doris Stokes and started to appreciate it as a novel in its own right. It’s an increasingly uncomfortable and terribly sad read (and I’m certain no bundle of joy to write) but its contemplation on misery and confusion, alienation and despair, self loathing and suicide are surely food and drink for followers of Richard James Edwards.